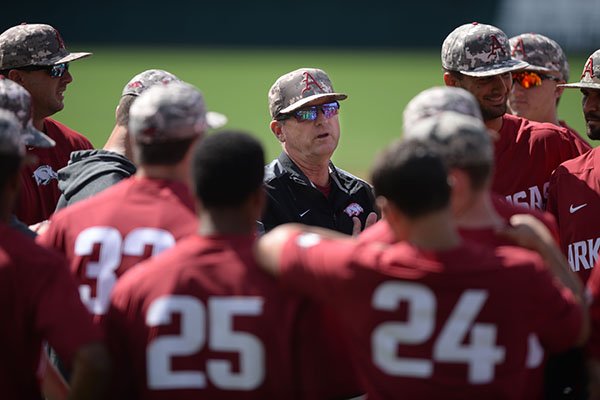 Arkansas coach Dave Van Horn speaks Thursday, May 30, 2019, with his team during practice and walk-through ahead of today's NCAA Baseball Regional at Baum-Walker Stadium in Fayetteville.

FAYETTEVILLE — The job of taking Arkansas’ baseball team to back-to-back College World Series by coach Dave Van Horn is made even more impressive given the limitations placed on college baseball.

Unlike other major-revenue sports where there are full scholarships, baseball has to share 11.7 scholarships between a maximum of 27 players, with another eight or so on the roster as well.

It is something Van Horn reflected on Monday night after the Razorbacks downed Ole Miss 14-1 to punch their ticket to Omaha, where Arkansas (45-18) will face Florida State (41-21) Saturday at 6 p.m. in its opener.

“Well, 11.7 is tough,” Van Horn said. “Sometimes you can’t get everybody you want and they end up on other teams you play and people wonder why you can’t get them because you offer them less than somebody else. They call you and say, ‘I want to go there, but they’re offering me this,’ and we say we can’t and they go somewhere else. It happens all the time.”

Van Horn has crafted a way over the years on how to go about splitting up the scholarship money with anybody on scholarship having to at least get 25 percent of the cost of attendance (tuition, books, room and board).

“The philosophy is you’re going to put a lot of money in pitching,” Van Horn said. “You’re going to try to be good through the middle. You have to get lucky. Guys have to develop.

“You have to get some guys on minimum scholarship, which is 25 percent, and you have to hope they have a little bit of an edge because they’re not on as much as somebody else. You have to get some academic guys that are on academic only. I could go on and on about just piecing it together.”

Once he gets players on campus, Van Horn encourages his players to go about their business with a chip on the shoulder if they do not like their financial piece of the pie.

“Then when they get here you tell them, 'I don't care how you got here and I don't care if you're on scholarship, you're a walk-on or a recruited walk-on,” Van Horn said. “If you're the best player you're going to play. Then you have to go back that up and do that, and we do that every year.”

Nesbit hit .262 with three home runs and 41 RBI, stole seven bases and recorded a .963 fielding percentage while starting 58 of the 61 games he's played in.

“That's why a guy like Jacob Nesbit can come out of nowhere to fight to get back on. Academically, you've got a lot of those guys, 4-5 guys that contribute that aren't on any kind of athletic aide. That's how you survive.”

The result of Van Horn’s math was one part of the equation that got Arkansas a return trip to the College World Series.

“It is amazing what you can do with a little bit of hard work and a little bit of luck and a bunch of guys that believe,” Van Horn said. “It has been very gratifying and an amazing season.”

Arkansas sophomore shortstop Casey Martin, who was a freshman All-American last season, is amazed at how his head coach gets it done.

“What Dave Van Horn has done here for this program is amazing,” Martin said. “The program is obviously really good and that is why so many kids want to come here right now. They also know that college baseball helps them better themselves and their skills.”

Martin admits that he could not have been a Razorback without some scholarship money, and that many players are racking up student loan debt to stay in school.

“You have to think about your family and what is affordable,” Martin said. “To me, I was in the same boat as a lot of guys in that college was not really affordable for me unless I got a decent scholarship.

“It is definitely a tough decision for families. Some guys will come to college, and others won’t because of the money situation.”

Martin is sure he made the right choice.

“Choosing the college route was probably the best thing I have ever done both on and off the field,” Martin said. “It helps you learn life lessons that relate to baseball.”