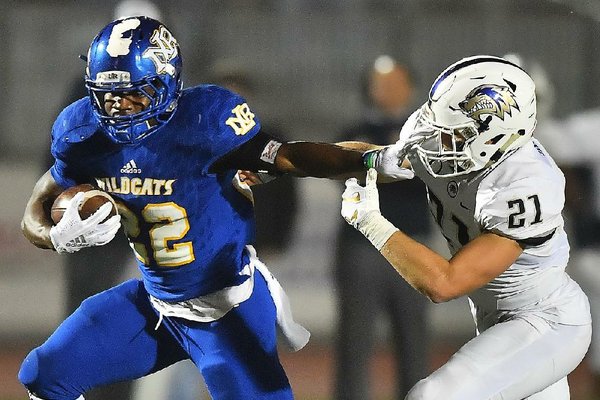 Junior Brandon Thomas has rushed for more than 1,600 yards and 14 touchdowns for North Little Rock this season.

Arkansas has extended an offer to North Little Rock running back Brandon Thomas.

Thomas (5-10, 190 pounds) also has offers from SMU, North Texas, Arkansas State, Memphis, Louisiana Tech and South Alabama. He rushed for more than 1,600 yards and 14 touchdowns prior to the Class 7A state title game against Bryant.

He recorded times for 4.42 and 4.46 seconds in the 40-yard dash at school and as low as a 4.39 seconds at the All-Arkansas Camp at UCA on June 1 with Coach Chad Morris, offensive coordinator Joe Craddock and tight ends coach Barry Lunney Jr. in attendance.

Thomas helped the Wildcats to the Class 7A state title as a sophomore and runner-up finish as a junior.

“The way he’s able to shed people as they tackle him, we’ve never really had anyone at North Little Rock like that,” Pizan said. “The way he’s able to keep pounding out through the game and his intensity to drive throughout the game is something I haven’t seen before. His durability has been impressive as well. He takes some shots and he gets hit a lot.”

Thomas, who has a 555-pound squat and 325-pound power clean, seldom turns the ball over.

“I don’t how many times he has carried it in two years, he’s only fumbled twice,” Pizan said. “That’s big for use. We’re a big ball security team.”

Pizan credits Thomas’ mother for raising him the right way.

“Brandon Thomas is a genuine, down-to-earth, humble kid,” Pizan said. “Two years ago, he was the state championship MVP and then past year he had an incredible season. He’s always in the backfield with some great players. The most impressive thing about Brandon is not one time have we ever seen him in a practice or a game be selfish. Wanting the ball more. He’s always the first one congratulating teammates and give thanks to everyone.”