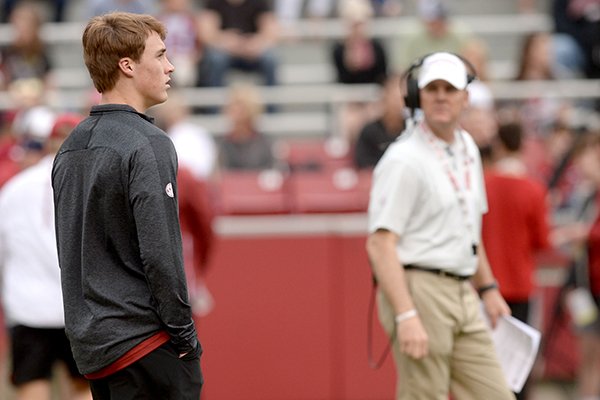 Morris, 5-10, 172 pounds, of Highland Park in Dallas, also had scholarship offers from Oklahoma, Clemson, Kansas State, Auburn, Colorado, Virginia Tech, Kansas and others. He told his father of his decision first part of the year.

The elder Morris was happy to hear about his son deciding to be a Razorback.

“He gave me a big hug. He was excited,” Morris said. “We understand that we have got a lot of work to do together. There are going to be some things that are gong to be weird about it, but it is gong to be a really cool story and a lot of fun and a lot of success.”

He made the decision to announce his pledge because he knew of his plans to visit Arkansas and participate in the Elite Razorback Passing Academy on Friday.

“I didn’t know the next time I would be in Fayetteville, but I knew that I would be up here for this camp tonight,” Morris said. “I just felt like I wanted to be around the whole Arkansas family and share this special day with them.”

Morris completed 266 of 411 passes for 4,055 yards and 46 touchdowns while throwing only 6 interceptions and rushing 131 times for 652 yards and 19 scores as a junior. He led the Scots to a third consecutive Texas 5A Division I state championship last season.

Morris was named the offensive MVP of the championship game after he completed 23 of 35 passes for 262 yards and 3 touchdowns, and was intercepted once in the Scots' 27-17 win over Shadow Creek at AT&T Stadium. Morris had a fourth touchdown pass overturned on a replay review.

He weighed the pros and cons of attending Arkansas.

“It was the most difficult decision that I have had to make and as an 18-year-old. It kind of seems unfair that you have to make this decision at this young of an age,” Morris said. “But it was a tough decision and I had to lay out the pros and cons and I noticed that I had more pros than I had cons.

“I knew there was going to be a lot of pressure on the line, but I am not the type to run away from pressure. So I understood that and I didn’t let the pressure scare me away.”

He is Arkansas' second commitment of the day. Running back John Gentry of Houston North Shore pledged to the Razorbacks on Friday morning. Arkansas now has nine commitments for the 2020 class, seven from Texas.

Morris is hoping to recruit others from the Lone Star state and other areas to Fayetteville.

"I will be on those Texas boys and all over the country,"Morris said. "Hopefully I have the respect from them and they will want to come play with me and get this place right. We're going to do that for sure."

National recruiting analyst Tom Lemming of CBS Sports Network has been traveling the nation since 1978 seeing top prospects. He saw Morris and numerous other top Dallas-Ft. Worth prospects on Dec. 29 of last year.

“He’s a coach on the field with a good arm, terrific mechanics and quick feet,” said Lemming, whose first All-American team in 1979 included NFL greats Dan Marino and John Elway. “He’s one of the more efficient quarterbacks in the country.”

Morris earned MVP honors among quarterbacks at the The Opening Regional in Dallas in March and beat out more than 40 other quarterbacks for the award.

"That's an honor," said Morris, who recorded an electronic 4.70 seconds in the 40 yard dash at the regional. "I've got that in a couple of weeks. I will be wearing that Razorback on a hat showing that logo off a bit. Talking to my some of my boys out there saying, 'We've got something special coming in Fayetteville. Let's go be a part of it.' That will be a lot of fun."

Morris is a dual-threat at his position.

"I mean, obviously I'm not your typical 6-4 quarterback everybody likes to talk about, but I think in today's game short quarterbacks are having success," he said. "I understand I can get out of plays with my feet. I'm confident enough to make any throw on the field understanding any time the play breaks down I can make plays with my feet."

“I just see a competitiveness," Morris said. "I don’t care what your height is. A lot of it is mental, in my opinion, at the quarterback position. You have to have that 'it' factor and you have to understand how the game works. Just decision making. That’s what it all comes down to.”