Hitched in Omaha: Arkansas fans say 'I do' outside ballpark 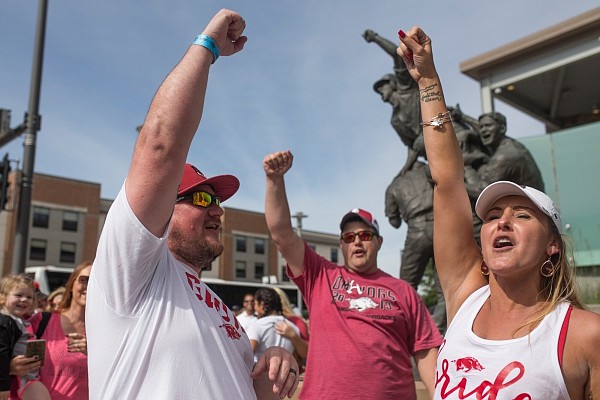 Seth Brown and Kellie Diedrich of Yukon, Okla. (from left) call the hogs after getting married during game two of the NCAA College World Series, Saturday, June 15, 2019 at the TD Ameritrade Park in Omaha, Neb.

OMAHA, Neb. — In January, Kellie Diedrich jokingly told her boyfriend, Seth Brown, they should get married at an Arkansas game should the Razorbacks return to the College World Series.

That joke turned into a reality Saturday in front of the Road to Omaha statue outside TD Ameritrade Park prior to Arkansas’ opener against Florida State, which it lost 1-0.

“I kind of laughed it off,” Seth said of Kellie’s remark earlier in the year. “The chances of them making it to the College World Series aren’t slim, but that’s not something they’re just guaranteed, so I just said, ‘Yeah, OK. That’s what we’ll do.’

“Sure as shit they made the College World Series, and we went ahead and went through with it.” 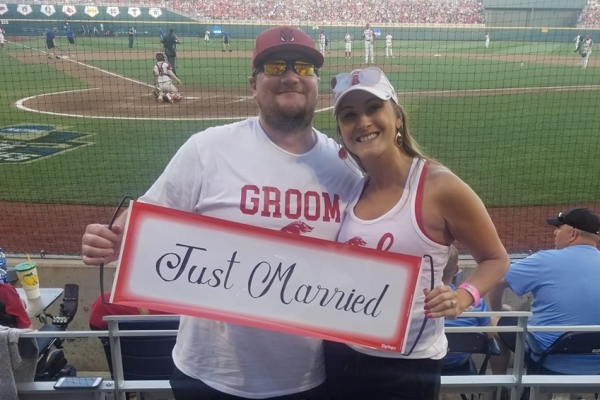 Seth Brown and Kellie Diedrich Brown at the Arkansas-Florida State game at the College World Series on Saturday shortly after their wedding ceremony outside TD Ameritrade Park.

The couple, which has been together for around two years, works together at a pharmaceutical company and lives in the Oklahoma City area. They arrived in Omaha for their weekend getaway on Friday and went directly to the courthouse to purchase a marriage license.

Saturday, they went to the ballpark at 4:30 p.m. to map everything out. The ceremony began at 5 p.m.

Seth’s cousin, Joseph Sabatini, wearing a red "OmaHogs" T-shirt and Arkansas hat, officiated the wedding. Seth was unaware Sabatini was ordained, but Kellie knew and arranged for him, his wife and three kids to make the trip from Springdale.

Kellie, described by Seth as an over-planner who has a tendency to overanalyze situations, was also proposed to in a unique way on June 9. Around 1:30 a.m. last Sunday, Seth woke her up and popped the question.

“I knew if I took her to one of our ‘special spots’ randomly that she would know something was up,” he said. “I just proposed to her right there in the bedroom.”

Seth said their respective anxiety was running rampant in the days leading up the wedding, but for different reasons. He doesn’t like to be the center of attention, meanwhile Kellie was in charge of ironing out the details, which included T-shirts that read "Bride" and "Groom."

"I’ve been here before and know the crowds," Seth said. "This thing I knew was going to turn into a spectacle."

At the time of the ceremony, a large number of Arkansas fans were gathered on the steps leading up to the entrance as they waited for the gates to open. Everyone had their phone out recording the wedding, he said.

And the crowd broke into a Hog call as he kissed his bride.

“They were so receptive,” said Kellie, a native of Heavener, Okla. “We had a large crowd around that was watching. They were so encouraging, and not only Razorbacks fans, but other fans were receptive, too, standing around and clapping.”