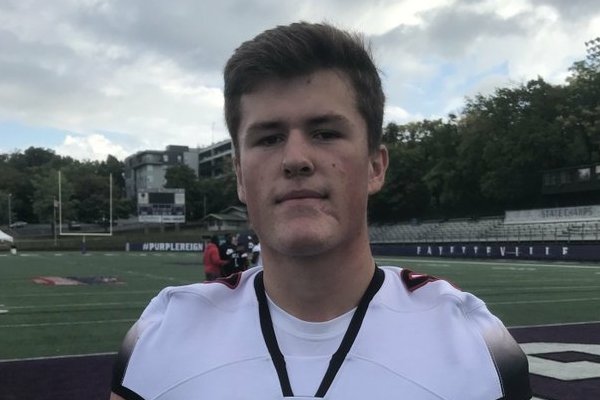 “They are very interested and talked to me forever, but want to see me develop a little more physically before they offer,” Brotherton said. “Coach Morris said that he thinks it will happen though. He said I’m on the right track.”

Brotherton (6-4, 235) has also camped at UCLA and Memphis and has plans to attend camps at TCU on June 21 and West Virginia in July.

TCU, Indiana, and Auburn reached out to him following the Memphis mega camp after he recorded 4.84 seconds in the 40-yard dash.

He was able to pick up some tips from Arkansas tight ends coach Barry Lunney Jr. on Saturday.

“I learned a lot about run blocking, about the steps and attack points,” Brotherton said.

Brotherton recorded 27 catches for 476 yards and 2 touchdowns as a junior for the Bearcats. He missed four games due to a wrist inury. Earning an offer from the Razorbacks would be big for Brotherton.

“It would mean very much. Having the chance to stay close to home, playing at the highest level,” he said. “I’m continuing to develop a relationship with the coaches.”