State of the Hogs: Saying a fond goodbye to 'Fair Park' 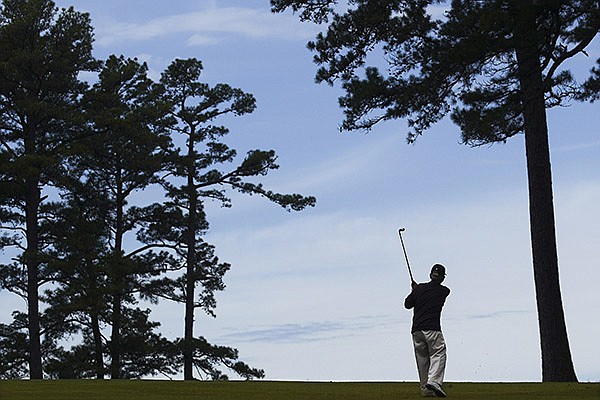 A golfer plays at War Memorial Golf Course on Thursday, April 21, 2016, in Little Rock. The course made famous by its tailgating during Razorbacks football games is set to close.

Nothing survives forever as a losing proposition, not even a beloved family treasure. So I’ll let the city fathers turn War Memorial Golf Course into what better serves the people of Little Rock.

What my family calls Fair Park has lost millions of dollars through the years. It’s not much of a golf course. It’s been in poor condition for many of the almost 90 years since Herman Hackbarth cut it out of pines on what was then the west side of town.

There was common bermuda on the greens for many years. Your putts could dive right or left because of severe grain. And, the best pin settings were in such demand that the best grass was often worn bare in short fashion.

The fairways were not always covered with grass, exposing rocks. Family tradition called for one of the 14 clubs in your bag to be suitable for playing off a rock. Sparks could fly.

The idea that tailgating for Razorback games would ruin those fairways was sort of laughed away. Yes, on a wet day, there would be damage, but there was the old line that it might actually help. It couldn’t hurt.

But to no one’s surprise, I’ll shed real tears when it’s closed following the annual Fourth of July tournament in a couple of weeks. There are just too many stories and memories.

It’s where my father, Orville Henry, and his four brothers (Ed, Howard, Travis and Bill) grew up as caddies. It was just a good brassie shot from their home just to the west of what is now Park Plaza Mall. Howard and Bill would go on to build golf courses and earn a lifetime living as PGA club pros.

I grew up in Uncle Bill’s shop at Riverdale Golf Course. Rebsamen Park Golf Course survives just to the west of Riverdale, once a country club and the home to members that founded Pleasant Valley CC.

So, I played more at Riverdale than my two older brothers, Butch and Russ. They learned at War Memorial, as did my father.

“We were caddies there, and caddies do get to sneak on to play,” my dad said. “And, we had one unmatched set of clubs that were divided to practice. It was depression time and there was nothing new in our bag.”

The real story was my Uncle Travis, a true lefty. When he came back from the war in 1945, he finally had the money to buy his first set that fit. A 10 handicap right-handed, he quickly became a scratch player as a lefty.

You can imagine the con games that Uncle Travis could win. If he beat you righty, you were going to lose all your money when he brought out his new set.

My favorite story from my dad concerned their lunch. My grandmother collected all the caddie money daily from her five boys. It could be as much as $10.

“We’d go three loops carrying double in the summer time,” Dad said. “You could get 50 cents a bag, a dime tip. That added up times five.

“Each morning, Mother would give us a sack lunch. There would be peanut butter and jelly, a Hershey bar and a nickel for a coke. We’d pull out the Hershey bar and lick it in front of the other boys so they wouldn’t fight us and take it. Then save it for later.” 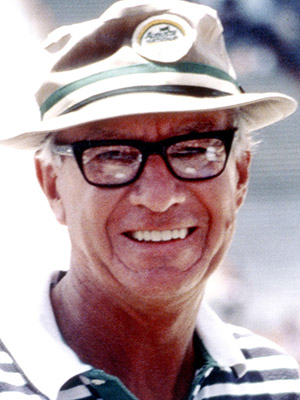 My dad’s last tournament round was at War Memorial. He was a senior and qualified for a seeded spot in the fifth flight. His first-round match went back and forth early and ultimately hinged on a breach of the rules on the 12th hole.

His tee shot there was past his opponent for the first time and there wasn’t much thought when he reached a ball. He played it. When his opponent moved up a few yards to the second ball, he discovered it was not his.

No way my dad was going to agree with his opponent that it would be anything other than loss of hole. They tied the last six holes and my dad lost, 1-down.

Anyone who knew my father would have guessed that decision. The rules are the rules. If you move the ball in the fairway, it ceases to be golf. All putts needed to be holed.

There is a famous confirmation of my dad’s thoughts on the rules. Paul Eells reached for a second ball after a mediocre tee shot in his first round with my dad. Before Eells could play his mulligan, my dad said, “Paul, are you going to play or are you going to practice?” Jim Elder and Harry King were doubled over laughing at the back of the tee.

My father’s first published story was printed in the Arkansas Democrat at age 15 in 1940. Titled “Caddies work hard-but they like it,” it detailed the initiation that came on your first day when the older boys took out their belts for a good whipping.

I’ve got my own stories, including my first competition after I made the Little Rock Central team as a sophomore. There is nothing like getting the card handed to you on the first tee with instructions from the coach, “Don’t be the No. 5 guy who gets his score tossed.”

Never once did that happen in high school or when I played on the University of Central Arkansas team for two springs.

I had a summer job at the Arkansas Gazette covering golf. My father, then the sports editor, let me also play. I was never a threat to the top amateurs in the state, or an elite junior like Stan Lee.

But once in the Fourth of July tournament, there were overnight dreams; thoughts that I might contend on the final day. That came after I made five twos on the eight par threes on the way to a 2-under 63. That put me in the final pairing on Sunday with Lee, soon to be a PGA Tour pro.

At breakfast there was conversation about the possibility of a monumental upset. Who would write it? My father said, “Don’t worry about it.” In other words, he’d know if he or someone else was needed.

I tripled the second, doubled the third, and came out of the woods at No. 6 green looking at another big number and in view of my dad for the first time all day. By then I was about 10 back of Lee. The Heber Springs phenom was well under par on the course’s toughest holes and headed to an easy victory.

And, my dad left for an afternoon round at Riverdale with Bud Campbell. They played every Sunday afternoon, then taped a weekly TV show - in their golf shorts out of view.

After dinner, there was a visit about the weekend. Frank Tarver, the tournament director and married to my Aunt Dot, had explained to my dad when he got out of the car on Sunday morning that I’d laid up on the par-4 18th on Saturday with nine iron.

You can hit a driver there, with a 200-yard carry over a creek. But you risk hitting it on Markham Ave., and that would lead to a big number. I explained that I wanted to break par for the first time in a tournament.

Apparently, Uncle Frank told on me because my father said, “Your Uncle Frank and I don’t believe a Henry should lay up at 18.”

Years later I pointed out to my dad that Petey King – pretty close to family - hit a wedge to lay up on the way to the trophy in the Fourth of July event. OK, maybe you can lay up on the 54th hole, but not the 36th.

My dad liked to point at the champions at the Fourth of July tournament like King and Lee. He said the good players always rose to the top.

“There is a lot of complaining about the shape of the course, but not from the great ones,” he said. “They figure out how to get it in the hole at Fair Park and they win. It happens every year.”

My brother Butch has his great Fair Park story. Incredibly, he and wife Lynn played Pebble Beach and War Memorial in back-to-back rounds in 2016 as part of a week-long trip to celebrate their 45th wedding anniversary.

Butch, an Alabama resident, made a phone call to me just before the round in Little Rock. I told him it could be a chance at an all-time low score.

An excited big brother phoned to announce, ”I parred the last five holes but didn’t realize I had shot 69 until I added the scorecard sitting in the car afterward.”

“Clay challenged me and I did it,” Butch told her. “First time I ever broke 70 at War Memorial.”

Lynn reminded Butch that their son, Brian, had played there as a junior golfer. Brian was a top player in Arizona high school golf in their Tucson days when the family vacationed to Little Rock.

“Don’t forget,” she told Butch. “Our son said it is a wimpy course.”

Butch reminded me of all of that this week as I phoned to tell him War Memorial would close. We both agreed that there wouldn’t be a chance for one more trip around the little course.

Butch recalled his 69, then said, “What a way to finish.”

I’ll remember all those twos. There were a bunch of true nine irons for most of those 120-yard shots. If here, my dad would probably remind of that nine iron lay up at No. 18.

For the record, I’ve hit my driver there every time since. Don’t be a wimp.