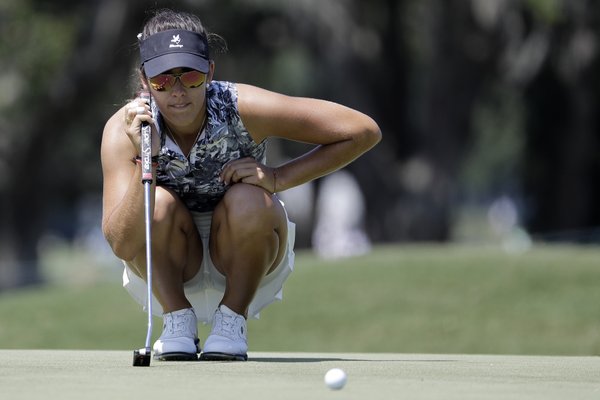 Maria Fassi of Mexico, lines up a putt on the ninth green during the third round of the U.S. Women's Open golf tournament, Saturday, June 1, 2019, in Charleston, S.C. (AP Photo/Steve Helber)

When Maria Fassi tees it up in the Walmart Northwest Arkansas Championship this week at Pinnacle Country Club in Rogers, she will have a lot of new fans.

University of Arkansas golf followers already know about Fassi because of her stellar college career. But the country discovered her at the inaugural Augusta National Women's Amateur in April, when she matched Jennifer Kupcho of Wake Forest shot-for-shot down the stretch on national television.

Kupcho won that tournament by playing the last six holes in five under par, but Fassi, of Pachuca, Mexico, won everyone's heart with her remarkable display of sportsmanship with her friend Kupcho.

After Fassi followed up with the NCAA individual title at the Blessings in May, Steve Burkowski of Golf Channel said, "From Augusta to Arkansas, Maria has displayed herself with the utmost class."

Kay Cockerill, also of Golf Channel, added, "Like we saw in Augusta, the sportsmanship showed itself in Maria's group."

Some wondered if Fassi would return for her senior year at Arkansas, having already won the 2018 Annika Award as the best woman collegiate golfer.

But last year in the NCAA Women's Championship, Fassi, a bit under the weather, shot 81-75-73-75--307 to finish 66th at Karsten Creek in Stillwater, Okla., as Arkansas missed the match play phase by one stroke. Her scores in the second and fourth rounds didn't count for the Razorbacks.

Mike Adams, Arkansas's 12th-year assistant coach said Fassi had the NCAA tournament circled on her calendar for a long time

"There was no way she was going to leave school early with the NCAA Championship coming here this year," Adams said.

That was despite the fact that Fassi had already qualified for the LPGA Tour.

Still, there was unfinished business and Fassi was determined to leave the Razorbacks' program on a high note.

Her immediate success at the major is not a surprise to Arkansas golf coach Shauna Taylor.

"Maria came back after a rain delay to make the three toughest pars of her life and make the cut on the number," Taylor said. "That freed her up for a great weekend, and she finished 12th."

Adams was not surprised, either.

Fassi's tremendous distance off the tee puts her at places on the golf course others can't reach. That is often a huge plus.

"Maria could always hit the ball a great distance," Taylor said. "In college, she learned how to use distance to her advantage."

Her long game caught the attention of the Arkansas men's golf team.

"That's why I was so confident Maria would win the NCAA," said Julian Perico, a member of the Razorbacks' men's team. "She has shorter irons to the greens and can hit the ball higher. She hits the ball longer than I've ever seen a woman hit it. She is the complete golfer.

"Whenever I needed to talk to someone, she was always there. I couldn't be more proud of her."

Fassi, who won the Honda Spirit Award for Golf, will find out Monday night in Los Angeles if she also wins the 2019 Honda Cup for best woman collegiate athlete in any sport.

Although her playing days for Arkansas are over, Fassi will carry with her memories of playing her final collegiate golf in front of a large Razorbacks following as she locked down the NCAA championship.

"Every time I think about our fans calling the Hogs at the Blessings, I get goosebumps all over again," Fassi said.

Arkansas athletic director Hunter Yurachek, one of those Hog callers, said Fassi is an exactly the representative of what Arkansas wants as a student-athlete.

"The sportsmanship she modeled at Augusta was great, and yet she was as competitive as it gets, especially the last nine holes," Yurachek said. "She will make more money off the course than on, because of how personable she is."

Fassi, who is the first woman to win the Annika Award back to back, met Yurachek's 14-year-old son Brooks at the Annika dinner last year.

"This year at the Blessings, Brooks said, 'Dad, she remembered my name!'" Hunter Yurachek said. "That speaks volumes about the person she is."

Taylor credited the success of another Mexico native and former Razorback, Gaby Lopez, with helping recruit Fassi to Arkansas.

"Gaby had such a great experience here and her teacher also taught Maria," Taylor said. "There will be an adjustment period for Maria as a pro as there was for Gaby, but we've talked to her about being prepared for each phase of golf.

"There is such an expectation for her now. One of the big things will be learning how to say no."

Coming close at Augusta has been a learning experience for Fassi as she begins to build a professional career.

"I think not winning at Augusta was probably the best thing that could have happened to me," she said. "Now that I have reflected, I knew I was going to learn a lot more by coming in second. That fueled me. That made me wake up early, go work out and then practice until dark."

It also made her a household name in golf.

By David Gottschalk Maria Fassi watches her shot on the first hole May 20 during the NCAA women’s golf championship at the Blessings Golf Club in... + Enlarge