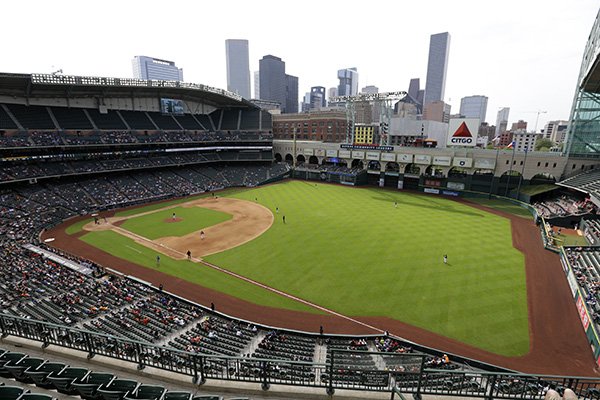 FAYETTEVILLE — Arkansas' games in the 2020 Shriners Hospitals For Children College Classic will be against all Big 12 teams.

The Razorbacks are scheduled to play Oklahoma at 3 p.m. on Friday, Feb. 28; Texas at 7 p.m. on Saturday, Feb. 29; and Baylor at 7 p.m. on Sunday, March 1, according to the schedule that was released Monday. All three games will be played at Minute Maid Park in downtown Houston, home of the MLB Houston Astros.

Arkansas previously played in the Shriners event in 2012 and 2016.

The 2020 Shriners College Classic will be between all SEC and Big 12 teams. LSU and Missouri will also represent the SEC.

Arkansas has an all-time record of 5-1 in the event, including a 7-3 victory over Texas in 2012. The Razorbacks have also played Texas Tech, Rice and Houston at the event.

The 2020 matchup between Arkansas and Texas will mark the third consecutive season they will play after playing on-campus games the past two seasons. The games against Oklahoma and Baylor will be the Razorbacks' first since 2012, when they lost a regular-season matchup to the Sooners in Norman, Okla., and won two of three games against the Bears in an NCAA super regional in Waco, Texas.

The Shriners dates are the first known for Arkansas for the 2020 season. During a speech at the February Swatter's Club meeting, Arkansas coach Dave Van Horn said the Razorbacks also have midweek nonconference games tentatively scheduled at Oklahoma and Michigan State next season, the start of home-and-home series that will include return games in Fayetteville in 2021.