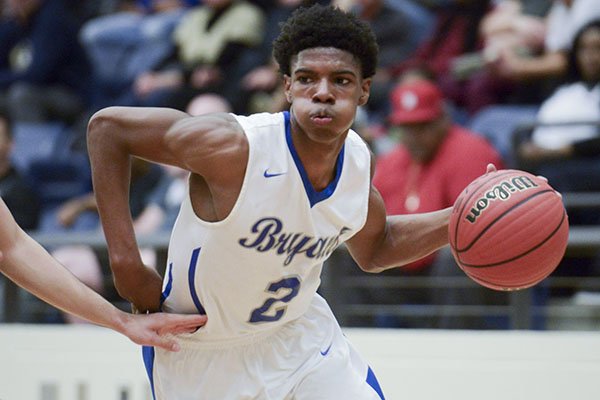 Robinson, 6-1, 170 pounds, picked up the offers at another solid showing at the Midwest Basketball Showcase in Kansas City over the weekend. The Jayhawks offered him Sunday evening followed by Arkansas several minutes later.

He had offers from Florida, TCU, Illinois, Iowa State, UTEP, Louisiana Tech, Missouri State and others going in to the event. Texas A&M, Minnesota, and Virginia Tech have also expressed interest.

Robinson earned a spot on the Arkansas Democrat-Gazette All-Arkansas Preps first team after averaging 18 points, 4.5 rebounds, 3 assists and 3 steals per game while leading the Hornets to the Class 6A state title game as a junior.

Arkansas coach Eric Musselman notified Robinson of the offer from the Razorbacks.

“They’ve been talking to me for a while and after this weekend they said they couldn’t wait until tomorrow to offer. They wanted to offer tonight,” Robinson said.

In the newly released ESPN rankings, Robinson is rated a 4-star prospect, the No. 19 point guard and No. 90 overall prospect in the nation. He’s planning to take his official visits later this summer.

“Sometime during August or September. None no time soon,” he said.