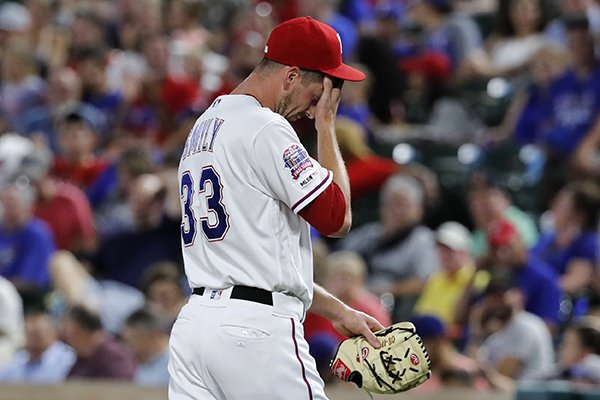 Texas Rangers' Drew Smyly wipes his face as he walks to the dugout after turning the ball over during the seventh inning of the team's baseball game against the Cleveland Indians in Arlington, Texas, Tuesday, June 18, 2019. Smyly gave up three solo home runs to the Indians in the inning. (AP Photo/Tony Gutierrez)

ARLINGTON, Texas — Drew Smyly struck out the last batter he faced for the Texas Rangers. That came right after the veteran left-hander, who already had lost his spot in the starting rotation, allowed three consecutive home runs in a five-pitch span.

Smyly was designated for assignment by the Rangers on Thursday, two days after his last appearance.

After not pitching in the majors the past two seasons because of Tommy John surgery, the 30-year-old Smyly was 1-5 with an 8.42 ERA in 13 games (nine starts) with the Rangers.

"He's coming off injury, and I don't think the expectations were overly high, but I think, it honestly didn't work out," manager Chris Woodward said. "He was fighting to figure things out. I think it's just best for him, and honestly best for us, to just have him move on."

The Rangers made the move before their series finale against Cleveland, when they also optioned left-hander Joe Palumbo to Triple-A Nashville after he was the loser Wednesday night. Texas brought up a pair of lefties, Kyle Bird and Locke St. John, for St. John's possible big league debut.

Texas also said Jesse Chavez would move from the bullpen to the starting rotation, and is the likely starter Tuesday at Detroit.

Chavez made his team-high 34th appearance Wednesday night, pitching five innings in relief of Palumbo after his second start since coming up from Double-A Frisco. The 35-year-old Chavez is 2-2 with a 3.18 ERA.

Smyly allowed 19 homers in 51 1/3 innings. In his last appearance Tuesday, in a 10-3 loss to the Indians, he took over in the fourth and needed 32 pitches to get through the inning. He was gone in the seventh after the first three Cleveland batters went deep before he struck out Mike Freeman.

"There were times that it looked like the work he was putting in was going to pay off," general manager Jon Daniels said. "We were just at a point in the season where we felt like we had given it a chance. ... He was putting work in, it just wasn't paying dividends at this point."

The Cubs signed Smyly to a two-year deal when he was coming off surgery, and he pitched one minor league inning for Class-A South Bend at the end of last season.