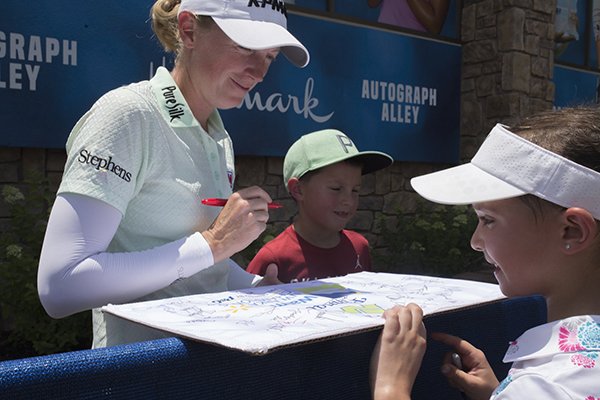 Stacy Lewis (left) signs an autograph for Payton Lindsay, 9, of St. Louis (right) during the first round of the Walmart NW Arkansas Championship, Friday, June 28, 2019, at Pinnacle Country Club in Rogers.

ROGERS — So long as the University of Arkansas fields a women’s golf program, Stacy Lewis remains its queen.

She does need an enlarged throne to accommodate those reigning with her.

Nobody seems happier seeing the throne shared than Stacy Lewis herself. Aside from becoming the first UA women’s NCAA golf champion (2007) - following lone Razorbacks’ men’s NCAA champion R.H. Sikes (1963) - and becoming the most consistently successful UA turned professional golfer of either sex even with PGA greats Miller Barber and John Daly among the UA men’s alums, Lewis whenever she can, helps Razorbacks’ women’s coach Shauna Taylor as a volunteer assistant.

She’s even proud that Lopez, the 2015 NCAA runner-up and winner at a LPGA tournament in 2018, and Fassi, the 2019 NCAA champion and already a long-hitting LPGA sensation, surged into this tournament perhaps with better chances than her.

While asserting it’s infinitely worth the trade-off, Lewis admits struggling to recapture her game since eight months ago birthing daughter Chesnee.

But she would wax proud of the accompanying Arkansas five at Pinnacle under any circumstances.

“I love being around the girls and helping them prepare as much as I can,” Lewis said.

The 12-times LPGA winner, including two majors, was specifically asked about the two closest to her throne.

“I’ve played with Gaby a couple of times already this year, and she’s playing probably the best golf of her career,” Lewis said. “I’m excited for her because she’s really trending in a really good direction right now. And Maria is just a talent that you see once in a generation. A lot of sponsors and other players and caddies come up to me and say, ‘Holy cow she hits it far!’ I wouldn’t say it’s cocky, but she’s got some swagger to her, a belief in what she’s doing. She’s not afraid to say she wants to come out and be the best, which I love.”

The respect certainly is reciprocated.

“Stacy was a mentor to me when I was playing college golf,” Lopez said. “I got a lot of spark out of her when she was world No. 1.”

Fassi upon her first pro tournament said she benefited from Lewis’ advice.

“At the (U.S.) Open I was practicing and it was like 110 degrees,” Fassi said. “She was like, ‘Go home. You’ve done the work. Go rest.’ She doesn’t have to do any of those things yet she does them. Watching her wanting the best for me, it’s very nice and very humbling. Hopefully, I can do that for some future Razorbacks one day.”

All hail the queen.