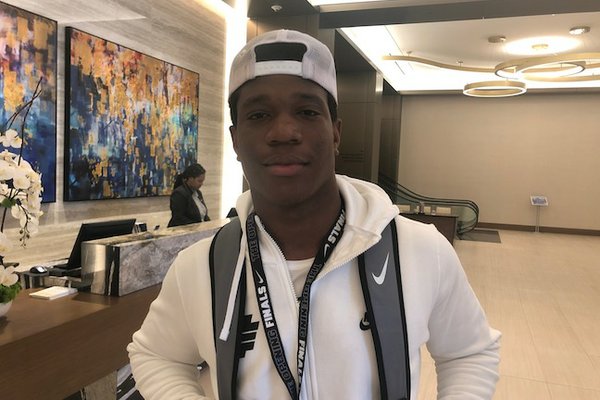 Both Morris (5-11, 180) and Criswell (6-1, 218), Arkansas’ top 2020 in-state quarterback prospect, are three-star prospects on hand for the prestigious Elite 11 competition at The Star in Frisco and were offered by the Razorbacks.

But it seemed that Arkansas and Criswell drifted apart, and that led the Morrilton standout to choose North Carolina.

“Coach Lunney said they welcomed me to come to Arkansas, too. That just made it seem to me like I was wanted as much, so I decided to take a different path.”

Criswell, who joined Morris in the top eight Saturday afternoon in the long toss competition, made it clear that he harbors no ill will toward the Razorbacks coaches.

“Look, I think the Arkansas coaches are all great guys and coaches and they treated me well, but they just had a guy they wanted first,” Criswell said. “I grew up wanting to be Razorback, but it didn’t work out that way. I’m happy that I am going to North Carolina, which is a program on the rise.”

Morris passed for over 4,000 yards and 46 touchdowns last season while leading his team to a 16-0 mark and its third straight Class 5A Division I state title.

He publicly committed to the Razorbacks on June 14, but had known he was going to be playing for his dad since January.

“Coach Longo recruited me while he was at Ole Miss and we had a great relationship,” Criswell said. “There was no reason not to continue that relationship when he moved.

“Coach Brown is a great coach and I feel like he is really going to take the program to a great place.”

Criswell was 126-of-211 passing for 1,947 yards and 20 touchdowns as a sophomore with just four interceptions.

Criswell was injured during the 2018 preseason and missed the first nine games before returning for the final five games and throwing for 1,109 yards and 11 touchdowns for the Devil Dogs (9-5).

“It was tough to deal with and I had to put in a lot of work,” Criswell said. “But it was also something that allowed me to see just who really believed in me and really wanted me after I got injured.”

Criswell led his team to four straight wins upon his return before Justice Hill-led Little Rock Christian downed Morrilton 61-42 in the Class 5A state playoff semifinals.

"We lost about all of our guys on defense, but we have a good bunch of our offense coming back," Criswell said. "I think we have a chance to not only be one of the teams, but the team this season."