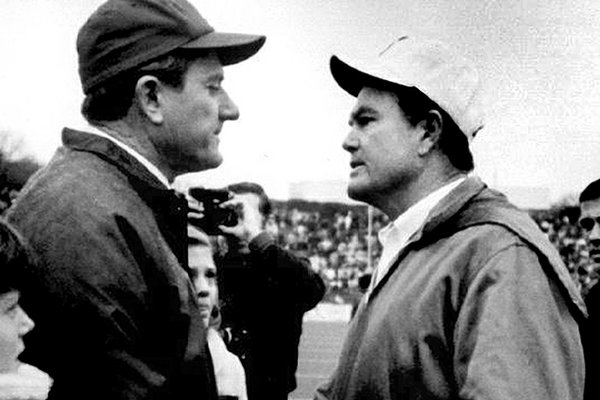 When the first email came almost two years ago, the first thought was long shot.

Mark McDonald, a former sports writer for the Dallas Morning News, was touching base and sharing the news of his new project — a book on The Big Shootout, 50 years later.

Another trip through that 1969 epic of a game between the University of Arkansas and Texas, which was a heartbreaking 15-14 loss on national TV that was attended by President Richard Nixon and covered by newspapers from coast to coast.

ABC had moved the game to the season finale, and the nation got No. 1 vs. No. 2.

That game seemed to be the most dominant event in the state’s history.

Before Danny Ford ever coached a game for the Razorbacks, he asked, “Has anything good ever happened here. All I hear about it is a loss to Texas.”

That reverberated with this sports writer. A lot of good things had happened in the world of perspiring arts over the years, and it was time to put the loss to bed.

Yours truly was 19 when that game was played, and the next week I volunteered for the Air Force. Nothing like joining the service to get over a broken heart.

Anyway, several emails were exchanged with McDonald, a guy who had played college football himself and understood all that goes on in a locker room before, during and after a game.

He interviewed vast numbers of players from both teams, as well as fans. He researched the social and political attitudes of the times. McDonald doesn’t short-change the era when it comes to race and American culture.

What McDonald ended up with was the ultimate book on a football game that changed lives.

It is well over 300 pages of dialogue, interviews, opinion, facts and pictures. Any Razorback enthusiast who reads the book will come away with a sense of restoration.

It is titled Beyond the Big Shootout — 50 years of Football’s Life Lessons, which is a very appropriate title.

The book is easy to read, expertly chronicled and handled with an even hand.

It can be purchased for $35 at www.beyondtheshootout.com or on Amazon. It is worth every penny, and some might say it is even a bargain.

McDonald graduated with a journalism degree from the University of Texas-El Paso, but he must have taken a handful of courses in sociology.

The easy path would have been to break the game down and explain how the Razorbacks should have won, but that’s not what McDonald did.

The game was so close, Texas offensive lineman Bob Hays said: “Every time James [Street, the quarterback] watched a replay, he bet on Texas.”

There are 58 chapters in this coffee table book, and each one explores a different aspect of the game.

There is no indication, not even a hint, that McDonald is a lifelong Texan.

It isn’t ironic that the first 29 chapters cover the build up to the game, and the final 29 the aftermath of 60 minutes that became known as the game of the century.

The index alone is 11 pages, and that shows the depth of this project. McDonald interviewed the guys who lived the game and how it influenced their lives.

Many of the players have died, but they live on in this book for their contributions to one game and a lifetime of what they learned that cold afternoon in Fayetteville.

Beyond the Big Shootout is a long but easy read. The book sits alone on my coffee table, slightly dogeared now, and your scribe wouldn’t take $35 for it.

The book is a masterpiece and a keeper.