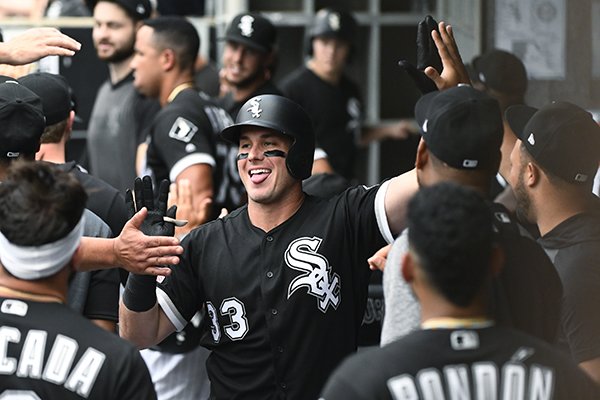 Chicago White Sox's James McCann (33) celebrates in the dugout after he hit a two-run home run during the first inning of a baseball game against the Minnesota Twins on Friday, June 28, 2019, in Chicago. (AP Photo/Matt Marton)

James McCann is an MLB all-star for the first time.

The 29-year-old catcher will be the back up for the American League on July 9 in Cleveland. McCann, who is in his first season with the Chicago White Sox, finished second to New York Yankees catcher Gary Sanchez in all-star voting last week, but was one of the reserves who were announced Sunday.

McCann has had an offensive resurgence since his offseason move to Chicago from Detroit, where he played five seasons for the Tigers.

McCann's batting average is the best among all MLB catchers this season, 29 points higher than a second-place tie between Wilson Contreras (Chicago Cubs) and Tony Wolters (Colorado Rockies) at .291.

McCann played three seasons at Arkansas from 2009-11. He is the first former Razorbacks player to make an all-star roster since Dallas Keuchel did during his 2015 Cy Young Award season with the Houston Astros.