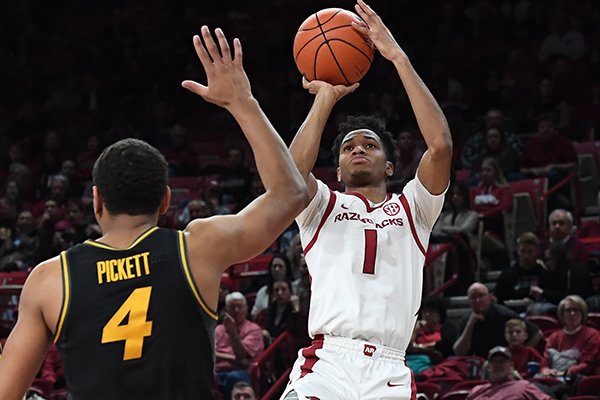 Arkansas guard Isaiah Joe shoots during a game against Missouri on Wednesday, Jan. 23, 2019, in Fayetteville.

FAYETTEVILLE — If last season’s NIT was any indication, the University of Arkansas men’s basketball team should be fine with the NCAA moving the three-point line back 1 foot, 4 3/4 inches.

It was a small sample size, but the Razorbacks shot better with the deeper three-point line in the NIT than they did from the 20-9 distance. Arkansas hit 241 of 704 three-pointers (34.2%) prior to the NIT.

Eric Musselman, the new Razorbacks coach, can feel good about the rule change with the team having its top three-point shooters back in sophomore guards Isaiah Joe and Desi Sills, and junior guard Mason Jones.

“I don’t think it’s going to affect those guys at all,” Musselman said last week on the SEC coaches’ summer teleconference. “I actually think it will benefit really good shooters.”

“We’ve already laid the new three-point line down on the practice floor and have encouraged our guys to shoot a little bit beyond that even as they work on their own, or when we’re doing individual skills,” Musselman said.

The NCAA’s three-point line is now equal to what is used in international basketball, but still short of the NBA’s 23-9.

“You look at NBA rookies when they’re used to the college line, and they have to move a couple of feet back, guys’ percentages usually dip a little bit,” Musselman said. “So I would assume there’s going to be somewhat of a drop-off in overall three-point percentages across the college basketball landscape.

“I think the players will adjust in time, and maybe toward the conference part of the season, some guys’ percentages will go up.”

“I’m not a big proponent of shooting 40 threes, and if you are, your percentage is going to go down now,” Kentucky Coach John Calipari said. “I think it will make the game more about moving and spacing and open up the lane a little bit.”

Auburn didn’t average 40 three-point attempts last season — settling for 31 per game — but the Tigers led the nation in three-pointers made (454) and attempted (1,204) en route to making their first Final Four appearance with a 77-71 overtime victory over Kentucky in the Midwest Regional final.

The final six-point margin was from beyond the arc, where the Tigers hit 7 of 23 and the Wildcats 5 of 21.

“I wish the line had been farther back last year, because it would have helped us even more,” Auburn Coach Bruce Pearl said. “We had so many guys who could shoot it from great distances.

“I think it’ll be a positive thing for the game even though the percentages will go down a couple of points the first year.

“It won’t affect your great shooters. It’ll affect your guys who don’t shoot it very well, because they won’t make as many, and they’ll take fewer.”

“My teams have always shot the three since it came into existence,” he said. “I just can’t see that changing much.”

Nate Oats, Alabama’s new coach, said the Crimson Tide use the NBA three-point line in workouts and award four points for a made basket from that distance.

“We’re trying to get our guys to deepen the range and spread the floor even further,” Oats said.

Mississippi State Coach Ben Howland said that with the three-point line moving back, he’d like to see the court widened from 50 feet to 53 feet.

Space between the three-point line and sideline has narrowed from 4 feet, 3 inches to 2 feet, 11 inches.

“Let’s go ahead and widen the floor a little bit more. Just add 3 feet — 18 inches to each side. Just give us a little more room to work with out there.”

Moving back the three-point line was approved by the NCAA Playing Rules Oversight Panel.

“Freedom of movement in the game remains important, and we feel this will open up the game,” Colorado Coach Tad Boyle, the committee’s chairman, said in May when the proposal was introduced. “We believe this will remove some of the congestion on the way to the basket.”

“I think percentages will come down,” Calipari said. “Now as a coach you’ve got to make a choice. Are we going to shoot that many threes? Or are we going to be more of a driving team?”

Arkansas could get a boost in perimeter scoring from senior forward Jeantal Cylla, a graduate transfer who hit 33 of 106 three-pointers (31.1%) at North Carolina-Wilmington last season.

Connor Vanover, a 7-3 transfer from California who hit 27 of 76 three-pointers

(35.5%) last season, is waiting to see whether the NCAA will grant his waiver request to be immediately eligible at Arkansas.

S e n i o r g u a rd Ji m my Whitt, who began his college career with the Razorbacks and is back at Arkansas as a graduate transfer from SMU, doesn’t figure to be much of a factor as a three-point shooter. He hit 4 of 28 attempts last season.

“I think guys that are trying to become three-point shooters,” Musselman said without naming names, “those guys will really struggle beyond the three-point line now that the line has been moved back.”