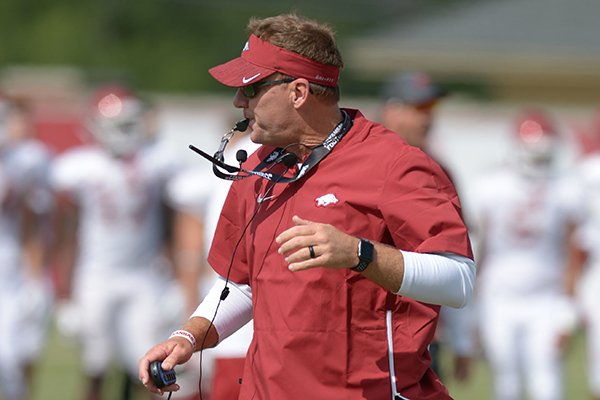 FAYETTEVILLE -- A big chunk of the University of Arkansas' No. 23-rated signing class enrolled in January and will hit the field with the returning veterans when the Razorbacks open spring drills today.

He spoke about each of the early arriving players at his pre-spring news conference Monday and particularly singled out the defensive backs.

"Two guys I want to mention that I anticipate these guys coming in and having an immediate impact are Devin Bush and Greg Brooks," Morris said. "These are two guys that are quick and have been very impressive through our mat drills."

Offensive coordinator Joe Craddock said he thought all the early enrollees were enjoying the head start this winter.

"How can you not like this place?" Craddock asked. "This place is incredible, around town, around campus, the people that live here.

"So these guys I think have really enjoyed being here. ... I think it's challenged some of them from an off-season standpoint, just because of how many things that we do that make it difficult and make you have to be mentally tough and push through things."

"We got to watch them a couple of mornings," he said. "I was really impressed with the way Zach was running, and Mataio Soli. Eric Gregory, 280 pounds, can flat run. I'm just looking forward to getting those guys on the field. It's unbelievable that those guys should still be in high school."

Said Morris, "Zach Williams is another one that is going through and got here in January and has really stepped in and picked up and is everything we expect of him, as with all these guys."

Offensive line coach Dustin Fry talked up the competition and depth that Cunningham and Nwanna will bring to his unit. He was asked if the junior college pair could push left tackle Colton Jackson and projected first-team left tackle Noah Gatlin for jobs.

"Myron's going to push Colton. Those two positions are going to be better because of those guys."

Said Morris, "To be able to come in and know that we've got an opportunity to promote and demote on the spot, from an offensive line standpoint, will help us.

"We want to put some pressure on those guys. We're going to create competition and see how they're going to respond. I'll tell you this, Colton Jackson and Shane Clenin have done exceptionally well. They've done a really good job in quarter one."

Safeties coach Ron Cooper said Brooks and Bush will be tested at the top cover positions.

"But they're important to us, just like the other guys that are coming in this August. We'll need all of them to chip in and play. We're just looking forward to getting them better."

Cornerbacks coach Mark Smith said having Brooks and Bush in this winter has been a significant development.

"That's critical on their development as ... they're already with the strength staff and getting acclimatized within the team and kind of the culture and the way things work," Smith said.

"They're two really different strories. Greg, flipping him late. Devin, being on him early and then sliding away and coming back in. That just kind of shows the funny game of recruiting."

Hicks has a chance to earn the starting quarterback job after the departures of nine-game starter Ty Storey (to Western Kentucky) and two-game starter Cole Kelley (to Southeastern Louisiana).

Hicks will have the most experience in the quarterback room in the Morris-Craddock offensive schemes after his three seasons at SMU with that duo. Redshirt freshman Connor Noland is expected to split time between baseball and football this spring.

The other quarterbacks on the roster are redshirt sophomore Daulton Hyatt, redshirt freshman John Stephen Jones and signee KJ Jefferson, who is not an early enrollee. Nick Starkel, a graduate transfer from Texas A&M, is on a campus visit this weekend.