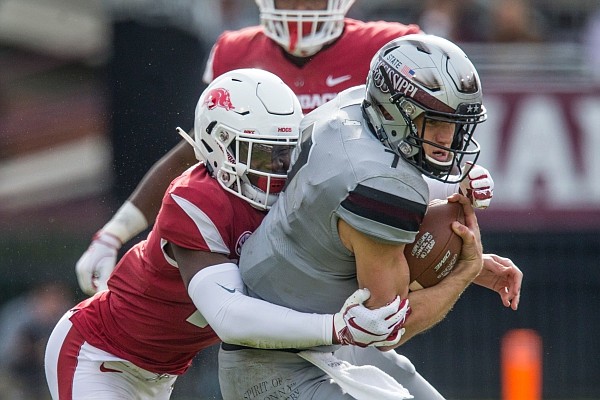 FAYETTEVILLE — Joe Foucha's first start at Arkansas was unconventional, but he took it as an opportunity to grow and springboard into his sophomore season.

Following the suspensions of veteran corner Ryan Pulley and safety Kamren Curl, Arkansas coaches made it known in the week leading into the Razorbacks' season finale at Missouri that Foucha and fellow freshman defensive back Myles Mason would see their playing time increase significantly.

Friday, after Arkansas' first spring practice, Foucha said he used the game as a chance to prove himself and become more accustomed to the speed of the SEC. He finished with three unassisted tackles in the 38-0 loss to the Tigers.

"Starting that game meant a lot to me," he said. "I started against a good quarterback, and I’m going to see some good quarterbacks in the SEC, but that was a big opportunity for me. ... That game for me was fast. That’s all I can say. It was fast."

In his early years growing up in New Orleans, Foucha didn't play sports. But after Hurricane Katrina hit south Louisiana and devastated his hometown, he and his aunt moved to Baton Rouge, where he first picked up baseball.

A couple of years later, Foucha wanted to come back home.

That's when he began playing basketball, the sport he calls his first love. These days, he plays for leisure and is intramural teammates with De'Jon Harris. Basketball meant so much to him he even got a basketball-related tattoo on his arm.

But once he decided to give youth football a shot at 10 years old, he began playing on the offensive line, then fullback, then, eventually, his coaches gave him a run at quarterback.

Quarterback didn't quite work out for Foucha in high school, he said with a laugh, so settling in at another position was his best bet to find the field. And one day, his high school coach at McDonogh 35 approached him about trying out defensive back - a position he'd never played.

"My sophomore year, I must have picked up like 12 offers my first year playing DB," Foucha said. "That was like a big accomplishment for me. I seen the light come on."

Foucha considers himself a mature person on and off the field, carrying the ability to take any and all criticism thrown his way and use it to expand and develop his game. Last week, secondary coach Ron Cooper said he would grade Arkansas' secondary play last fall a 'D.'

The Razorbacks finished 11th in the SEC in 2018 in passing yards allowed per game (245.2). Opposing quarterbacks collectively totaled a league-worst 152.4 passer rating as well.

"We don’t hang our head down about it, we’re just going to improve," Foucha said. "And I felt like today we communicated a lot with each other, and that I think will kind of bring us up a grade. I feel like there’s a lot of things we need to work on.

"If we work on our weaknesses instead of our strengths we’ll be good."

Foucha is a key part of what Arkansas' staff believes to be a talented, potential-filled secondary. In previewing spring practice on Monday, Chad Morris said he expects a big spring and sound season from Foucha and all of the Razorbacks' young defensive backs.

Foucha is ready for the challenge and eager to make his mark as a sophomore.

"Not too many people where I come from get to this level," he said. "I’m like the first to go to college in my family, so I just want to show my family and those coming under me that it’s possible to do it.