Joe near record for 3-pointers 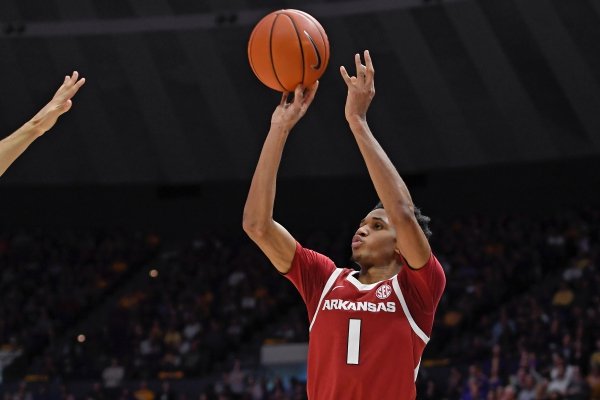 FAYETTEVILLE -- Freshman Isaiah Joe is on the verge of setting the University of Arkansas basketball program's season record for three-point baskets.

Joe, a 6-5 guard from Fort Smith Northside, needs five three-pointers to set the record, which could happen as soon as Saturday's Arkansas-Ole Miss game in Walton Arena. He leads the SEC in total three-pointers made at 98 and per game average at 3.5.

Joe closing in on Thurman

If Joe can duplicate against Ole Miss what he did at Kentucky on Tuesday night -- when he hit 5 of 7 three-pointers in the Razorbacks' 70-66 loss to the No. 4 Wildcats -- he'll set the record.

The former Razorback who currently holds the record will have a front row seat to watch Joe's attempt.

Scotty Thurman, who set the record with 102 three-point baskets during the 1994-95 season, is an Arkansas assistant coach.

"I give a lot of credit to Isaiah," Thurman said. "He's done a good job of coming in here and embracing his role and what's been placed upon him. I think he's to be commended for that.

"I think I've helped him a little, but Isaiah was a great shooter when he came in."

"Physically being 6-5, Isaiah can shoot over the top of a lot of guys," said Bradley, an analyst for the SEC Network. "That helps right off the bat.

"He's also a threat to put the ball on the floor, so that helps him create a little space. From a defensive standpoint, if you run at him out of control, he's got another move he can go to -- a pull-up jump shot or taking it to the rim. That gives him another second to catch and shoot."

"Joe's an elite shooter," Vanderbilt Coach Bryce Drew said after Joe hit 6 of 10 three-pointers in Arkansas' 69-66 victory over the Commodores. "He has such a soft touch, and he gets it off very quick.

Arkansas Coach Mike Anderson credited Joe with continuing to improve this season even after opponents have been more focused on him defensively.

"People are playing him a little harder, but he's progressed," Anderson said. "You'll see him get even better, stronger. He's worked and worked to be the player he is and he's putting it on display. I think that's refreshing."

"It's a big honor to be able to break that record," Joe said at the time. "Not a lot of people get that opportunity. But at the same time I would have rather not broken the record and got the win."

"Isaiah has come through for us in a lot of games with his shooting," Gafford said. "I'm just happy for him because he gets in the gym and works on his shot every day and works on his game."

Joe, who has started every game and is averaging 14.3 points in 30.1 minutes, said he hasn't been surprised by his success as a freshman.

"Because I've been shooting my whole life," he said. "But to know that I am one of the best in the country, it's a great honor.

"Then to know that I have my teammates to back me up, to help me out through the journey, means a lot. I'm not doing all of this on my own. I've got teammates that can find me when I'm open and then I'm able to knock down the shots."

Bradley said he's impressed with how quickly Joe made the transition from high school to college basketball. Joe hit 5 of 8 three-pointers in the season opener against Texas and had at least two in each of the first 10 games -- including 10 of 13 when he scored 34 points against Florida International.

"You see a lot of young guys that are unsure at times," Bradley said. "It usually takes them a while to get comfortable.

"But from what I've seen, from day one, Isaiah was ready to step in and do it. So that's a credit to him, as well as the people around him.

"That's the coaching staff and his teammates telling him, 'Listen, we trust you, we believe in you. Don't second-guess yourself. Don't catch and look around. Step into it, catch and shoot. We know you can shoot. We want you to shoot. Go ahead and do it.' "

Thurman said he'll be happy for Joe to break his record for three-pointers in a season.

"When I was young and playing, that was a big deal for me," Thurman said. "But now that my playing career is over, I hope he breaks every record I ever set because that means I'm doing my job and helping him get better."