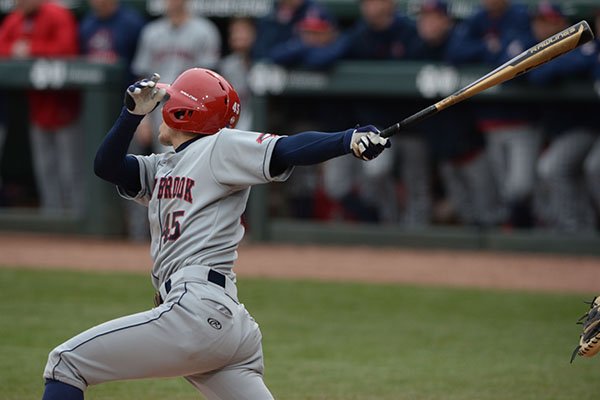 Stony Brook's John Tuccillo swings and misses during a game against Arkansas on Friday, March 1, 2019, in Fayetteville.

FAYETTEVILLE — Stony Brook coach Matt Senk has been at his New York college for 29 seasons, even leading his team to the College World Series along with Arkansas back in 2012.

But Senk knows that you have to put the ball in play to be successful and his Seawolves fanned 29 times as the Razorbacks swept a doubleheader by scores of 3-1 and 4-3 on Friday before 2.000-plus fans at Baum-Walker Stadium.

“We fought right down to the bitter end in both games, every last out, every last pitch and I am very proud of my team of how my team and how we played hard all game,” Senk said. “We pitched terrific, but we just have to put the ball a lot more than we did.

“That’s elite pitching we saw from Arkansas, but still would have been nice to cut down on some of those strikeouts and give ourselves a chance to win.”

Greg Marino, Stony Brook’s Game 1 starter, had a perfect game heading into the bottom of the fifth before Dominic Fletcher laced a double off the wall.

Matt Goodheart followed with a bunt single to move Fletcher to third and Arkansas went up 1-0 on Casey Optiz’s fielder’s choice.

The Razorbacks then chased Marino in the sixth and pushed the lead to 3-0 when Casey Martin doubled, Trevor Ezell tripled him home and Ezell scored when reliever Adam Erickson’s first pitch was wild.

“I couldn’t be more pleased about our guy (Marino) and the way he set the tone for the day for us and that was important for us,” Senk said. “That is what your Friday guy is all about, your number one.”

Arkansas pitcher Isaiah Campbell (3-0) had a career-high 13 strikeouts while allowing three hits and walking just one in seven scoreless frames of Game 1.

“The word 'elite' just keeps coming to mind, Senk said referring to Campbell. “He is an elite college player who has a real future in the game. Campbell was tremendous and as great as advertised. He comes right at you as he should. He has plus stuff. He is a special player.”

Kevin Kopps and Matt Cronin followed with an inning of relief. Kopps struck out two, Cronin struck out three and the Razorbacks tied a school record with 18 strikeouts.

Stony Brook avoided a shutout with a one-out home run by Dylan Resk against Kopps in the eighth.

Cronin allowed the tying and go-ahead runs to reach base in the ninth, but fanned a trio of batters with the bases loaded to get his third save of the season.

“Arkansas has some great players and many of those came through in big situations today,” Senk said. “But that is what you expect of big-time players. You expect them to come up in big-time situations.”

Stony Brook jumped to a 2-0 lead in the opening inning of the second game when Nick Grande doubled off Arkansas starter Cody Scoggins and scored on a sacrifice fly, and then Michael Wilson drilled a homer over the center-field fence.

Arkansas rallied with a pair of runs in the second, scoring one on a wild pitch and another on Jacob Nesbit’s RBI single on which Jack Kenley scored all the way from second to tie it 2-2.

The Razorbacks then took a 3-2 lead on Casey Martin’s double and Heston Kjerstad’s RBI single to third.

The visitors tied it up 3-3 in the fourth on Brandon Janofsky’s RBI single.

Kole Ramage (3-0) pitched 3 2/3 scoreless innings before Jacob Kostyshock closed it out with two scoreless frames, although he did allow the go-ahead run to reach second base on a two-out throwing error in the ninth.

"You’ve got to be able to get through those," Arkansas coach Dave Van Horn said. "Give them credit, they made some things happen and put the bat on the ball … He hit a little dribbler and Kosty makes that play most of the time. He just pulled the first baseman off the bag and put himself into a bind, where now they have the go-ahead run in scoring position.

"It was good to see him come back and get that last hitter....Kostyshock was really locating his fastball in those two innings he pitched. Normally he has a little better slider, and his slider wasn’t there today. So he just went with the fastball for the most part.

The Razorbacks plated the winning run in the fifth when Heston Kjerstad doubled and scored on Fletcher’s sacrifice fly. Kjerstad had four hits in the doubleheader after entering in a slump.

"That was good for him and I really like the hustling double," Van Horn said. "That ended up being the winning run.

"It was good to see him have some success. That’s going to breed some confidence and hopefully he’ll come out tomorrow and have another good day for us."

Stony Brook came south in hopes of warm weather, but that was not the case as the doubleheader started with temperatures in the 30s.

“I apologize for bringing the weather with us,” Senk said. “But this is an amazing environment to play and I am so thankful for Coach Van Horn in giving us the opportunity. As disappointed as we are now for playing so well and coming up with two losses, we are looking forward to tomorrow.”

The two teams will close out the series with a Saturday game at 2 p.m. with freshman pitcher Connor Noland expected to start for the Razorbacks. Stony Brook has not named a starter.