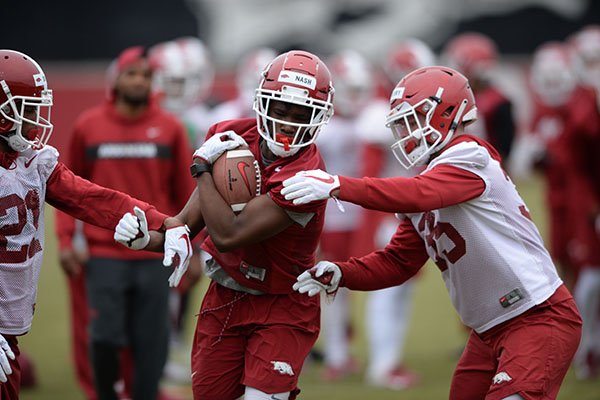 FAYETTEVILLE -- Half of the four-man class of incoming wide receivers hit the field Friday on a chilly opening day of spring drills for the University of Arkansas.

The Razorbacks worked in shorts and helmets in the first of 15 practices, culminating with the Red-White Game on April 6.

The Razorbacks hit the jackpot at receiver by signing all four stars, including 6-3 Treylon Burks of Warren; 6-4 TQ Jackson of Jefferson, Texas; and the Tennessee-based duo of 6-5 Trey Knox and 6-3 Shamar Nash.

Knox and Nash are early enrollees, and there's no doubt their presence will elevate the sense of urgency for an Arkansas receiving group that lost its top pass catcher with eligibility remaining -- Jonathan Nance, then La'Michael Pettway -- in each of the past two seasons.

Senior Deon Stewart said the unit has to mesh, and the upperclassmen have embraced the challenge brought on by the youngsters.

"The only thing we can do is accept them," Stewart said. "You don't want to be on bad terms with somebody coming in because we're all family, so you want to accept everyone. They're all part of the family. If they can help us win, then that's perfect."

Graduate transfer Ben Hicks led the group of quarterbacks by taking the first snaps in drills as the Razorbacks worked outside on the UA practice fields with temperatures hovering in the mid-30s.

"It was cold out there," Hicks said. "I never thought I'd say I miss Texas weather, but no, it was good to be back out there."

Hicks, who has three years of experience in the offense run by Coach Chad Morris and coordinated by Joe Craddock, said leadership is part of his role.

"You kind of get it, just because I'm old and I've played a lot of football," he said. "I think that's my job, is to come in and be the leader of this team. Just bring guys along and just push this process along, so it's kind of a part of playing the position."

Also in the group were scholarship quarterbacks Daulton Hyatt and John Stephen Jones, and walk-on Jack Lindsey. Redshirt freshman Connor Noland was in the dugout at Baum-Walker Stadium observing the Hogs' doubleheader sweep of Stony Brook and preparing for his start on the mound in today's 2 p.m. series finale.

The completion percentage in drill work appeared to be higher than in last year's opening day of spring drills, and a wide array of receivers showed strong "hand" catches on balls away from their bodies.

"I feel like we looked a lot better than we did last year," Stewart said. "Coach Craddock said we looked like a totally different football team than last year. A lot of things looked good for the wide receivers, too."

Said John Stephen Jones: "I'd say we were completing a lot of passes. But we still have a long way to go to be where we want to be.

"But today was great. Obviously we weren't in shoulder pads or anything, but getting out there and being able to put our foot forward from kind of a rough year and get the bad taste out of our mouths and start a new journey was fun."

Tight end Cheyenne O'Grady made the catch of the day in the early portion of practice with a one-handed snag of a high ball from Hicks.

Knox showed his catch radius while working in a group with Woods, Jackson and Jimmie Stoudemire, bringing in two high balls with "hands" catches.

Receivers coach Justin Stepp had a strong hand in landing both Knox and Nash.

The competitive nature of the two early enrollees at receiver is undeniable.

Craddock said more chunk plays at the wideout spots are a must. After torching Eastern Illinois for a trio of long touchdown passes in the season opener, the Razorbacks' deep-ball game slowed to a trickle last year.

"Yeah, we need to be more explosive," Craddock said. "I think we were dead last last year in that category. It's something that we've got to really challenge our guys on. We're going to do some things in practice to make it more fun to hit a home run, to have a big play."

Stepp sounded elated about the elevated competition the new receivers will bring to his room. Stewart, Woods and Jordan Jones caught 17 or more passes last year, while Warren, Jackson and Tyson Morris showed flashes in a few games.

"We'll have a good mix of old guys and young guys," Stepp said. "We've got some older guys in here that have played a lot of ball.

"It's time for Jordan Jones. Time for him to take that leadership role. He provides speed and explosiveness that we don't have in that group. De'Vion Warren in the slot, what he can do not just on kickoff returns, but being the guy that always puts that pressure on the safeties.

"Then mixing in Mike, and I'm fired up to see Koilan Jackson and what he can do healthy."

Coach Chad Morris wants the wideouts to feed off each other and pick up their performances through competition.

"What I've seen is this: I've seen De'Vion Warren and Deon Stewart and Mike Woods, Jordan Jones, Koilan Jackson, I've seen those guys have to elevate their game even more," Morris said. "So there's a sense of urgency ... in that wide receiver room, which is good to see. All of them rose their game and that's what you want."

Knox gives Arkansas a wideout with a combination of height, speed and wingspan that hasn't been seen on the Hill since Greg Childs and Mekale McKay were around earlier this decade.

"I think he's going to be a really good player for us," Craddock said. "Not saying we didn't hit on everybody else, but I'm saying we definitely hit on Trey Knox.

"I think he's going to be a really good player for us through the years. He's got the potential and the want-to and the drive and the desire to be a special player in the SEC and the country and even at the next level."

The first practice drew a huge crowd of observers, including former Razorbacks such as quarterback Ryan Mallett and defensive tackle Alfred Davis.