Thurman happy to be back home 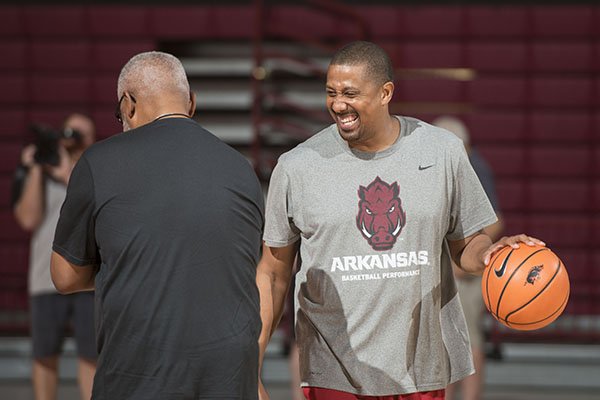 FAYETTEVILLE -- Scotty Thurman worked real estate flipping houses in Little Rock when he came home to Walton Arena with the rest of the 1994 Arkansas Razorbacks in 2009 to celebrate the 15th anniversary of their national championship.

Today Thurman is home as the 1994 Razorbacks of former Coach Nolan Richardson are celebrated again at Walton Arena on the 25th anniversary of their national championship.

He's home as an assistant to Mike Anderson, the one assistant serving all 17 of Richardson's Arkansas seasons and top assistant when shooting star Thurman thrust the late-game 3-point shot national championship dagger into Duke.

"It's very different because I never really imagined that I would be in this situation," Thurman said. "But it's something I take great pride in. I walk around this state and anywhere else in the country with my chest poked out very proud of this program and what we were able to accomplish. And I'm doing everything in my power to help us get back to that level."

It could be said Thurman in Fayetteville again is house flipping. Not to sell of course, but in the firm headed by Anderson trying to flip the Razorbacks' house back to the palatial standards of the Richardson run from 1989-1996. That run encompassed three Final Fours, including the national championship and national runner-up, one Elite Eight, three Sweet Sixteens, three Southwest Conference championships and two SEC championships.

Today the 14-14, 5-10 in the SEC Hogs seem run aground losing six consecutive games.

Certainly not what Anderson, with no losing seasons in 16 years head coaching Alabama-Birmingham, Missouri and Arkansas, anticipated, but not entirely unexpected starting over with zero seniors instead of six.

Anderson, as an assistant during Richardson's 12-16 first year, and Thurman, as a student development administrator during John Pelphrey's last forlorn year preceding Anderson, know hard times, too. They experienced Anderson inheriting a program troubled on and off the court and accelerating 27-9, 26-10 and 23-12 three of the last four years.

They know pitfalls must be lived through with encouragement but never settled upon as satisfactory.

Hence Anderson on the 18-point underdog Razorbacks' close but no cigar in last Tuesday's 70-66 loss at nationally No. 4 Kentucky.

"I'm not into moral victories," Anderson said. "Obviously we played well, but we didn't play well enough to win the game, and that's how I look at it. We did some positive things, but close but no cigars don't get it. When you get over that hump, that's what makes it special."

Especially special when some working to get over that hump are part of what Thurman called "the elephant in the room" that all Razorbacks teams since have aspired to match, the 1994 national champions honored today.