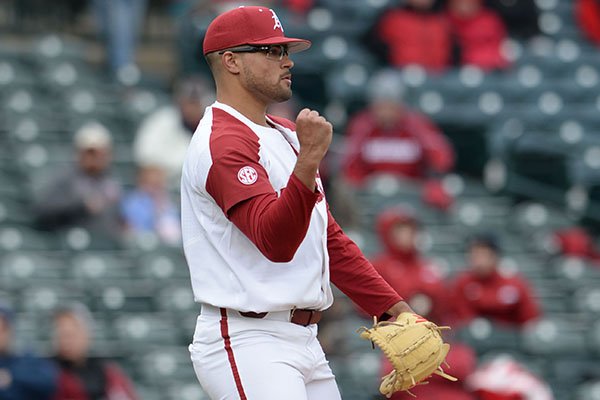 Arkansas pitcher Isaiah Campbell celebrates an out during a game against Stony Brook on Friday, March 1, 2019, in Fayetteville.

FAYETTEVILLE -- Stony Brook got the go-ahead runs on base in the ninth inning of both ends of a doubleheader against the University of Arkansas, but the No. 12 Razorbacks held on to sweep the Seawolves 3-1 and 4-3 on Friday at Baum-Walker Stadium.

"I thought all day the pitching did a really nice job and gave us a chance to win both games," Arkansas Coach Dave Van Horn said. "You've got to give Stony Brook credit. They played really well.

"They're just a team that's really hard to beat. They don't beat themselves. They've got some older kids. We just found a way to win a couple ballgames today, and it really started on the mound."

"That's elite pitching we saw from Arkansas," Stony Brook Coach Matt Senk said. "But it still would have been nice to cut down on some of those strikeouts and give ourselves a chance to win."

Kostyshock earned a save with two scoreless innings as the Razorbacks (8-1) showed their pitching depth against the Seawolves (3-5).

"We're a strong staff," Kostyshock said. "I think all around we've got great stuff. You look top to bottom and it's nasty. There are not many people on this staff you're going to hit hard."

Arkansas junior Isaiah Campbell (3-0) had a dominant start in the opener. He threw 7 scoreless innings and had a career-high 13 strikeouts while holding the Seawolves to 3 hits and 1 walk.

"Every pitch was working for me," Campbell said. "My curveball had a lot of depth to it, my fastball was moving in and out. My cutter, even some splitters in there as well."

Campbell had the most strikeouts by a Razorback since Trevor Stephan's 13 against Rhode Island in 2017. He also lowered his ERA from 5.32 to 3.12.

Senk said Campbell was as good as advertised.

"He's an elite college player who has a real future in the game," Senk said. "He comes right at you -- as he should. He has plus stuff. He's a special player."

Cronin earned his third save after allowing 2 hits and 1 walk, but he also struck out the side.

"That's Cronin," Campbell said with a laugh. "He just wanted to scare us a little bit.

"But we knew with Cronin, he's always going to shut the door. He's the best closer in the country, and it's really nice having him in the ninth inning."

Campbell, Kevin Kopps and Cronin combined for 18 strikeouts to match a school record the Razorbacks also had against Missouri State in 2009 and Grand Canyon in 2017.

"Kopps and Cronin came in and did exactly what I did," Campbell said. "Just pounded the strike zone and got ahead of hitters."

"He could throw just about whatever he wanted for a strike," Van Horn said. "He commanded everything and just did a real good job of getting ahead of the hitters all day."

Arkansas took a 1-0 lead in the fifth inning of the first game when Dominic Fletcher doubled for the first hit off Stony Brook starter Greg Marino (1-2), went to third on a single by Matt Goodheart and scored on Opitz's groundout.

The Razorbacks made it 3-0 in the sixth inning when Casey Martin doubled and scored on a triple by Trevor Ezell, who came home on a wild pitch.

Arkansas right fielder Heston Kjerstad, who came into the day batting .219, went 4 for 8 in the doubleheader to raise his average to .275. He went 3 for 4 in the second game and scored what proved to be the winning run when he led off the fifth inning with a double and scored on Fletcher's sacrifice fly to give the Razorbacks a 4-3 lead.

"It feels pretty good to finally contribute and help the team a little more," Kjerstad said. "They picked me up when I wasn't helping the team out as much, and today was my turn to do my part."

Kole Ramage (3-0) pitched 3⅔ shutout innings of relief for the Razorbacks in the second game before Kostyshock took over in the eighth.

Kostyshock retired the first four batters he faced before giving up a single to John Tuccillo. After Brandon Janofsky popped out, Nick Grande hit a grounder to Kostyshock, who threw wildly to first base for an error that put the tying and winning runs in scoring position.

"I wasn't upset about it," Kostyshock said. "I didn't want to get too ahead of myself with my emotions. I just stayed calm, cool and collected and did my thing."

That's pretty much what all of Arkansas' pitchers did in both games while limiting Stony Brook's scoring chances.

"That's winning baseball," Van Horn said. "You win when you do that most of the time. [The pitchers] gave us a chance to win on a day when we didn't swing the bats very well."