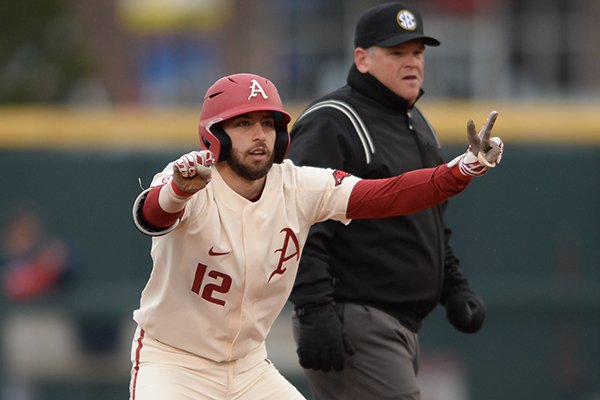 Arkansas catcher Casey Opitz signals to the Razorback dugout after hitting an RBI double Stony Brook Saturday, March 2, 2019, during the inning at Baum-Walker Stadium in Fayetteville.

FAYETTEVILLE -- The University of Arkansas baseball team will carry a top-10 ranking into its next game Wednesday against the University of North Carolina-Charlotte at Baum-Walker Stadium.

The Razorbacks (9-1) moved up two spots to No. 10 in the USA Today baseball coaches poll Monday.

Arkansas has opened 9-1 for the seventh time in 17 seasons under Dave Van Horn, and the first since 2016. The Razorbacks’ best 10-game mark under Van Horn was 10-0 in his debut season of 2003. … The Razorbacks have gone 4-0 on their current homestand, a scheduled 14-game run at Baum-Walker Stadium that is the longest of the season. The stand wraps up with a three-game set against Missouri to open SEC play March 15-17.

A forecast of near-freezing temperatures for this afternoon with a wind chill factor in the 20s forced a cancellation of the Razorbacks' scheduled 3 p.m. game today against the 49ers (6-5). The teams were scheduled to play a two-game set.

"I think it's a high of 36, wind chill at 27 at game time," Coach Dave Van Horn said Monday afternoon. "It's really more about the wind chill than anything else. It's supposed to be windy tomorrow."

Van Horn said he's likely to start freshman left-hander Patrick Wicklander (0-1, 5.40 ERA) on Wednesday, and that right-handed sophomore Kole Ramage (3-0, 0.00) probably would have gotten the ball if both scheduled games against UNC-Charlotte were viable.

The 49ers -- which flew to Tulsa on Monday morning, then bused to Fayetteville -- have not announced a starting pitcher.

The Razorbacks say their 9-1 record is OK considering they have so many areas that can improve.

"We haven't really jelled yet," catcher Casey Opitz said. "And the fact that we're 9-1 and we haven't played anywhere close to the way we can play so far is really cool.

The Razorbacks lost 6-3 at UNC-Charlotte last season, though they had another scheduled game at BB&T Park in downtown Charlotte canceled due to rain.

"It's not really more like revenge, but kind of getting back to playing the baseball that we need to," Ramage said. "We didn't win out there last year, but I think we can show them that we are definitely the better team than they are."

The Razorbacks are not on the same home run pace they carried last year when they hit a school-record 98, but they're showcasing speed and scoring runs at a strong clip.

"For me personally, making decisions and running an offense, we're not going to just stand around and wait for somebody to hit one in the gap or hit one out of the park," Van Horn said. "We're gonna do some things.

"We've only hit and run a couple of times this year in the first 10 games. Obviously, we've attempted almost 30 stolen bases and we've been pretty successful. It's led to some runs. We'll continue to do that. It's nice having that option."