State of the Hogs: Morris delights crowd in Mountain Home 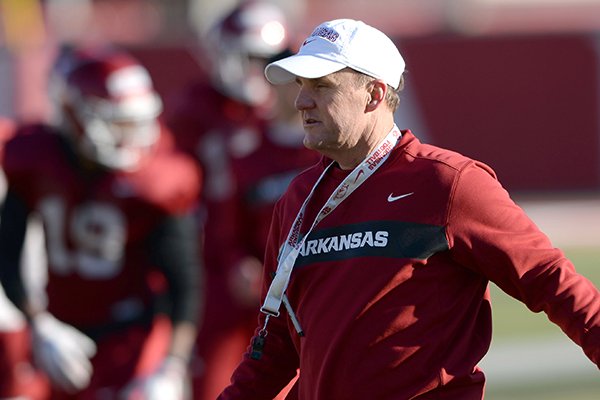 MOUNTAIN HOME — When pinned down this time last year after watching a couple of weeks of spring football, Chad Morris answered the question concerning the talent level of his first team at Arkansas.

“We've got to get bigger and faster,” Morris said.

That probably didn't surprise anyone. Coaches can say that at almost any time and be correct.

But it may have surprised everyone when the 2018 Razorbacks went 2-10, losing all eight games in the SEC.

I didn't have to ask Morris if the Hogs got bigger. I've seen it with my own eyes in the practices that have been open the first two weeks of spring drills.

There are several newcomers already on the field at wide receiver, offensive line and in the defensive secondary. All sparkle with either length or speed.

“We need to get some of those guys bigger,” Morris said Wednesday at the Baxter County Razorback Club. And, he told of efforts to continue to improve the talent.

There was a little talk about the recruiting efforts in his own household. His son, Chandler, is a highly regarded quarterback recruit, the most valuable player at the Elite 11 regional camp in Dallas over the weekend. Morris was asked by a fan at the luncheon how he stood with his son.

Morris said he would stay out of it to a point, letting quarterbacks coach Joe Craddock do the recruiting. But, then after a pause, Morris said perhaps his wife would get involved. Interestingly, Morris said the couple would celebrate their 26th wedding anniversary later in the day.

“This is the one time when I can give a player a new car, and then give his mama a new car,” Morris said.

The sellout crowd roared in approval.

Recruiting is always on the front burner with Morris. He expects “between 40 and 50 elite” players coming to town this weekend. The Hogs plan their first scrimmage of spring drills Saturday morning.

“We'll take them to the basketball game that night,” he said. “We expect a couple of commitments. These visits are from sure enough game changers.”

Clearly, there are game changers in the 2019 recruiting class. Morris talked about some already on the field. Wide receiver Trey Knox (6-5, 218 pounds) has made plays in each of the first three practices of spring drills.

“The bookstore will be selling No. 7 jerseys long before the season is played this year,” Morris said, referencing Knox's number. “Trey made a wow play in each practice so far.

“We have a lot of size on the edge (of the offensive line) right now,” Morris said. “Dalton had one of his best days (Tuesday). I credit that to competition. All three of those have unique length and size. With those long arms, it's hard to get around you on the edge.”

Coaches have also praised Noah Gatlin (6-7, 293) for his work this spring. Colton Jackson (6-5, 301) is the lone senior among the prospects at offensive tackle.

Senior Dorian Gerald and Gabe Richardson are off to good starts at defensive end. They were the pass rush specialists signed from the junior college ranks in the last two classes. Morris praised both, along with Jamario Bell, for solid starts to spring drills.

There appears to be help in the 2019 class in this regard, especially with the speed added in mid-term graduates Mataio Soli and Zach Williams. Interestingly, they both followed their fathers to become Razorback. Junior Soli and Rickey Williams were both highly-decorated defenders at Arkansas.

“Mataio really looked fast,” Morris said of his performance in the first three workouts. “When you watched film of the third practice, he really jumped. He's so quick off the edge. You like the speed there from Zach, too.

“Both of those guys need to get bigger, but they will. You just see a different level of speed from those guys. Defensively, we have added speed. And, we need to continue to add speed.”

Morris told the crowd that recruiting will continue to be a top priority, but that developing talent was just as important. There was a tip of the cap to the efforts of the strength staff in improving all areas of the team in the last offseason.

“I think you see in all areas that we are better,” he said. “And, we are working our tails off to develop these guys and continue to stack good recruiting classes on top of each other. When you see us practice, I think you can recognize a difference.”

Some of that is a better buy-in from the players.

“I think you can see it,” Morris said. “It's just normal that change is hard. Not everyone bought in. They have now.”

There was discussion of the quarterbacks on campus. SMU transfer Ben Hicks has impressed with his work ethic.

“He's the same guy, very confident,” Morris said. “But he's more driven. Our players have been impressed. What he did when he got here was keep his mouth shut and went to work. He's gone above and beyond in helping our other players.

“I left the media interview last night after practice and walked into the quarterback room. Ben had all of our quarterbacks in there studying the tape, doing some extra work.”

Morris told the group that he knows now where to go if he gets any free time. The plane trip into the regional airport north of Mountain Home produced some glorious looks at Bull Shoals Lake and the White River tailwater stretching to the south.

“We had bright sun and a clear view,” Morris said. “I'll be back. That lake looked great and I've heard stories about the river. I want a rod and reel in my hand and a chance at that. I'd love it. I see what you have here.”

Later, when someone said the hunting was just as good, Morris said, “There are turkey? Oh, boy. When is the season?”

Morris, who does love to fly fish, really hasn't done much hunting or fishing of late. Recruiting has consumed both the coach and his staff. Those who would know indicate this staff spends works harder in recruiting than most in memory.

There was one story about the first week after the season when head coaches were allowed in-home visits.

“I had nine in-homes scheduled in seven days,” Morris said. “That means you have your only window for the head coach to both go to the school and be in the home. That's all you get. I did nine in that week.

“So that means there were two days were I did two (different players). In case you didn't know, that's when Mama and Grandmama put out their A-plus spread. That means you need to be hungry, go back for seconds. Those two days, you really hope that it's something you like.”

It's clear from the sound – and the look of practice – that Morris understands what it takes in recruiting. It sounds like that goes for when it comes to his own son, too.