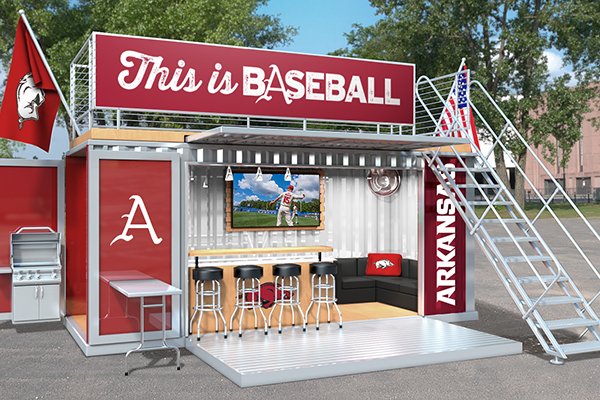 An illustration shows a box seating concept that will be available at Baum-Walker Stadium beginning with the March 15-17 series against Missouri.

"Razorback Boxes" are repurposed shipping containers that provide approximately 300 square feet of multipurpose use, and can be rented for single baseball games or for entire weekend baseball series. Arkansas will have one box in place for next Friday’s Missouri game, and could add up to two more before the end of the season.

Arkansas has partnered with Austin, Texas-based company boxLIFE to implement the concept. The Razorbacks’ units will be based on the company’s boxGATE design that is being used in tailgating areas at Texas Tech and inside the football and baseball stadiums at Austin Peay.

At Arkansas, the portable boxes will be placed in the back of the left-field area known as the Hog Pen, between existing bleachers and the gate at the corner of Razorback Road and Baum Drive.

Arkansas’ ticket office is handling the per-game lease of each box. Razorback Foundation priority points will be used to to determine tenants for games with a high volume of requests.

Each box includes access to a TV, a grill, a leather sofa and an 8-by-20-foot observation balcony that can accommodate up to 25 spectators. The boxes also include food-preparation areas, including a refrigerator and microwave.

Similar pod designs have been used in football tailgating areas at Wake Forest, Nebraska, SMU and TCU, and outside of NFL stadiums in Tampa Bay and Jacksonville. Boxes have been used at NASCAR races and professional golf tournaments, too.

Luxury seating is in high demand, but short supply at the Razorbacks’ baseball stadium. There is a waiting list of greater than 40 for the stadium’s 32 suites and there has been no turnover within the ownership of the suites in the past 10 years.

A $25 million facility that is being planned beyond the right-field wall is expected to add an undecided number of loge boxes to the stadium, similar to ones built in the north end zone of Arkansas’ football stadium prior to the 2018 season. Ground has not been broken on the new baseball facility and it is not expected to be completed until at least the 2021 season.