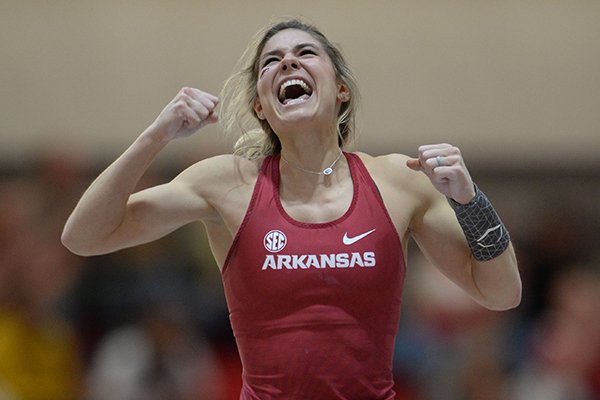 Arkansas' Lexi Jacobus celebrates clearing a height Saturday, Feb. 23, 2019, as she competes in the pole vault during the Southeastern Conference Indoor Track and Field Championship at the Randal Tyson Track Center in Fayetteville.

FAYETTEVILLE -- The University of Arkansas women's track and field team has been ranked No. 1 throughout the indoor season.

Now the Razorbacks are ready to go out and prove it at the NCAA Championships, which begin today in Birmingham, Ala.

Arkansas goes into the meet heavily favored after winning the SEC title with 151 points.

"I think this team may be the strongest that we've ever had, and that's saying a lot considering we've won two national titles," said Coach Lance Harter, whose Razorbacks won NCAA championships indoors in 2014 and outdoors in 2016. "This is the year that our coaching staff has been looking forward to because we've got experience, we've got talent and we've got depth. That's a tough combination to beat."

Arkansas has a combined 18 athletes -- including the 1,600 and distance medley relay teams -- with 15 scoring chances.

"We're so deep in our numbers," said Razorbacks sprinter Payton Chadwick, a senior from Springdale. "Everybody just has to go out there and do their job.

"I don't think there's any pressure. We've been in that No. 1 spot all indoor season in the projections because of the performances we've had so far. So if we'll just work together as a team, we'll win that title."

"That would be extremely special if we could win the team title and I won an individual title as well," Chadwick said. "Especially if it happened in my last indoor season as a Hog.

"I don't have just one event to focus on, and that helps me. I want to go out there running and not think, just execute the races. The [1,600 relay] has been pretty fun, so I'm not worried about that. That's just going out and giving whatever you have left."

Arkansas has another defending NCAA champion in pole vaulter Lexi Jacobus, a senior from Cabot. Jacobus and her twin sister, Tori Hoggard, finished 1-2 at the NCAA indoors last year and hold the top two spots nationally this season.

Other key scorers for the Razorbacks figure to be Kelsey Herman, a senior from Crossett, in the pentathlon; junior Taylor Werner in the 3,000 and on the distance medley relay; senior Kiara Parker in the 60; sophomore Janeek Brown in the 60 hurdles; and redshirt freshman Lauren Gregory in the mile and 3,000.

"I think we have three or four athletes who could threaten to win individual titles," Harter said. "But if they don't, hopefully they can grab eight points instead [with second-place finishes]. Accumulating a few of those really helps as well."

The Razorbacks, whose main competition for the team title figures to be No. 2 ranked Southern California, finished second to Georgia at last year's NCAA indoor meet. The Bulldogs won with 61 points while Arkansas scored 49.

The Razorbacks' men's team goes into the NCAA meet led by senior Gabe Moore in the heptathlon and its distance medley relay team.

"The DMR is always a crazy race," Arkansas Coach Chris Bucknam said. "Anything can happen. There are 12 teams in there [for tonight's final] and everybody has a shot to win. I think we have the best miler in the country [senior Cameron Griffith] on the anchor for us, so we'll see what happens."