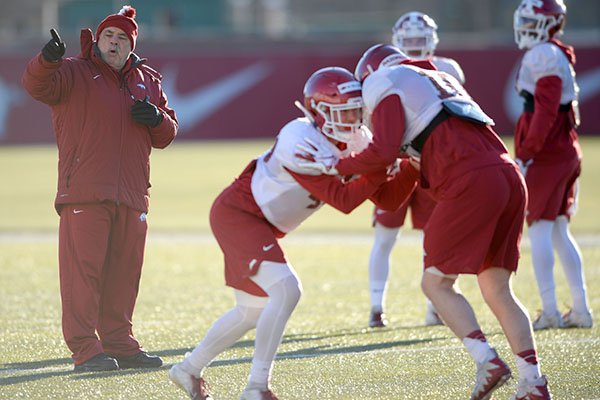 FAYETTEVILLE — It wouldn’t be that surprising to see legendary boxing ring announcer Michael Buffer yell out ‘Let’s Get Ready to Rumble” at a future Arkansas spring practice.

That’s because either the offense or defense is awarded a championship belt after each spring practice. It appears the defense took the honors for the third straight day after Saturday’s scrimmage.

“There’s some competitions that he’s got set up,” Chavis said. “You’re basically graded on the field - first down production, third down production… takeaways and all of those things. He’s got a deal that can easily, once you go through the practice, guys are charting everything that happens in those situations, and he determines it from those numbers, whether it’s the defense or offense.”

Chavis noted it has become a motivational tool the spring.

“Oh yeah, it’s creating competition in practice,” Chavis said. “They take a lot of pride in it. You do everything you can to make practice fun, but also make it as demanding as you possibly can.”

Arkansas linebacker Grant Morgan noted the offense had some big plays during Saturday’s scrimmage, but also had three turnovers.

“It’s like first-down efficiency at like 12 percent, number of sacks and stuff like that and the last one is turnovers,” Morgan said. “But if you get three turnovers or more, it trumps it no matter what else happens.”

Chavis was not happy with the way the scrimmage started as Devwah Whaley and Chase Hayden broke big runs, but loved the effort he got from the defense throughout the 100 play or so scrimmage.

“We had a miscue on the first play and then I don’t know what happened on the next play, but we gave up two long runs,” Chavis said. “Those are things that we have to eliminate if we ever want to become a good defensive football team. We’ll obviously, as we get a chance to look at the film, we’ll see what we need to do.

“Saw some guys flying around trying to compete and that’s what we want to do. The thing I wanted more today than anything was to see the kind of effort we were going to play with and see the kind of effort we’re going to play with because every series we went out there was an eight-play series and I wanted to see how we were playing the seventh and eighth play.

“That’s what I’m going to look the hardest for and then obviously from a coaching standpoint, the things that are lacking fundamentally, we have to build on. We’ll see where we are and we’ll know a little bit more after we watch the film."

Arkansas defensive end Jamario Bell liked what he saw out of the defensive front.

“Just as the front as a whole, I feel like we…settled down after the two big runs,” Bell said. “We settled down and everybody stayed in their gaps, stayed on their assignments. We still have a lot of work to do, but it’s a marathon and not a sprint.

“But just as a (defensive end) room, I feel like we are coming along very well. Like I said, there is a lot of little stuff that we need to do, lot of technique stuff, especially with me that I need to work on. But we are getting better and are a lot better than we were last year at this time.”

Bell loved the effort from a couple of young defensive ends in freshmen Eric Gregory, who had two early sacks, and Mataio Soli.

“Greg is a really talented freshmen,” Bell said. “He’s got the body. He just has to fit into it. He is like a big labrador puppy. He’s got all the tools, he is just not fitting it all in yet. He is a kid and he is always ready to learn.

“…Mataio is going to be a really great player one day. Greg is a really good player.”

Linebackers Grant Morgan and Bumper Pool are among players getting more reps in practice with senior De’Jon “Scoota” Harris out for the spring due to injury.

“Well, we’re getting some younger guys reps where they’re going to be able to play,” Chavis said. “They have to have those. I think both Bumper and Grant, both, in my opinion, will benefit tremendously. We don’t have a starting rotation so to speak of, but those two guys, if we played a game today, they’d be our starters.”

Andrew Parker, who redshirted last season as as a true freshman, and veteran Giovanni LaFrance are also getting significant reps at linebacker.

“Now, we have guys that are hopefully going to challenge them and make them better and that’s what we have to do,” Chavis said. “I felt good. (Andrew) Parker, he’s still a young puppy. Missed a lot of time even though he was here in the fall. Missed a lot of time with a hamstring injury. But he’s starting to come along.

“Gio is making a step, a big step in the right direction. So we’ve got some bodies. We’re a little bit thin, but we have bodies and we have bodies that are going to be well enough to play in the SEC. I have to do my job and that’s the bottom line. I have to get them ready to play.”