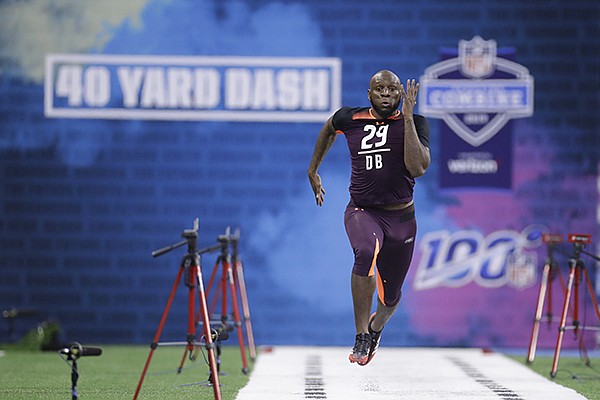 The time was a bit of a headscratcher, but he improved it Monday morning at Arkansas' Pro Day inside Walker Pavilion. Pulley said he ran a 4.49 in front of scouts from all 32 NFL franchises.

“I went out there off my weight at 209 and that wasn’t me. I felt heavy," Pulley said of his time at the combine. "I felt bad, honestly. My legs were heavy, I was tired all week. I came in here at 200, a lot lighter and felt pretty good. I’m going to stay at corner. I ran a 4.61 (in Indianapolis). I think it really helped me dropping a few LBs.

“It felt amazing. I was a little timid because I came off a hamstring injury, but no excuses. I did all the training and I think I did pretty good.”

Pulley admitted he lost focus in the days prior to the combine and ate "horrible stuff," which led to the weight gain.

"Right after the combine I got back home and started working again," he said. "No stop, grind, keep working, keep getting better. I want to be around 195-200.”

He was also asked about the less-than-ideal end to his Arkansas career in which he was suspended for the Razorbacks' season finale at Missouri for reportedly mingling with members of the Mississippi State spirit squad. The adversity has pushed him to work even harder.

“I just tell them the truth. They already know what happened," Pulley said of his response to NFL types regarding the situation. "What the media wrote, no reason to lie about it. Just go with the flow, no pressure. I don’t think it was what the media put out there, but I’m not going to get into it.”

Pulley, who trained in Fort Lauderdale, Fla., with defensive lineman Randy Ramsey, said a handful of teams have shown interest in him lately, including the Raiders, Bears, Texans, Saints, Chiefs, Buccaneers and Jaguars.

Armon Watts' breakout season in 2018 has been well-documented, and he's used it as a springboard into a potential NFL career.

Watts was timed at 5.23 seconds in the 40-yard dash at the combine, which ranked 29th out of 30 defensive linemen at the event, but did not participate in bench press, vertical and broad jumps or any other running test after tweaking his hamstring in his final position drill.

Monday, he got his chance on the bench press and put up 20 reps - his goal - of 225 pounds. Watts said he has "quite a few" team workouts and visits lined up, but didn't say with which organizations.

"It's like a dream," he said. "I don't even know if it has hit me yet. Just to see some of these guys out here and what they're doing, where I'm at is huge for me. I'm grateful for every day."

Watts said the hardest part of the combine was sitting in a room with as many as 15 NFL types dissecting film, breaking down his good and bad moments from 2018.

"It was good. For me, it was like a dream, especially with the up and downs I had here," he added. "For me to do that was big for me. I talked to a lot of teams, got a lot of good feedback. It was a good experience."

Hjalte Froholdt is happy with the work he's put in lately and where he stands ahead of April's draft.

The Denmark native worked out in Santa Ana, Calif., prior to the draft and trained on top of the apartment complex he lived in at the time. Froholdt said it was good to get away for a little while and focus on football and his future.

Froholdt's work at the combine focused mainly on moving in space, and he added that he was viewed as a guard in Indianapolis, but was able to showcase his ability at center on Monday as well.

The combine was stressful, he said.

"You can't lollygag. But when we finally got to Friday it was all the fun stuff. We got to go on the field and do what we've been training for."

As the first Danish player to ever be invited to the combine, Froholdt was ecstatic to be able to represent his home country. Questions from teams about his homeland were common, and the support he received from those he does and doesn't know was "unfathomable."

"I got so many text messages," he said. "There's a certain sense of pride to it being from Denmark and being able to represent my country. I think I did a good job at it."

Dre Greenlaw is his own biggest critic.

After running an unofficial 4.53 40-yard dash Monday, Greenlaw said he could have run better and faster, but, overall, he felt he was smooth at the school's Pro Day.

"I planned on running at the combine," he added. "I started up getting ready for the 40, started warming up, but whenever I took off to stride, I just kind of felt a little something in my hamstring and didn’t feel comfortable.

Greenlaw said he has 6-7 teams coming to Fayetteville to work him out. Communication has been positive since participating in the Senior Bowl, which was beneficial for him.

"For me to be healthy then and be able to showcase my talent and be able to run with shoulder pads on and make some plays out there, I thought was the biggest thing for me," Greenlaw said.

As far as the interview process at the combine, Greenlaw said he didn't get many off-the-wall questions. The one that stood out, though, was a team asking if he could drop back down to 220 pounds and play safety again like he did at Fayetteville High.

Between now and the draft, Greenlaw is unsure whether he will stay in Fayetteville or go to Houston, where his adoptive father, Brian Early, and family lives.

"I’m telling teams I’m going to be in Fayetteville, so right now for me it’s just grinding and doing the things I do every day," he said. "Just no days off, and hopefully on April 25 it’ll pay off."