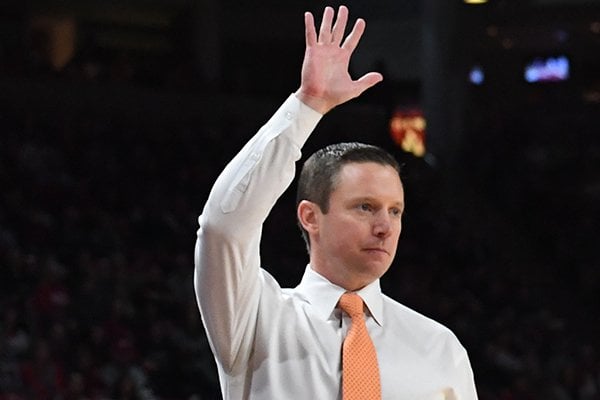 Florida coach Mike White motions to his players during a game against Arkansas on Wednesday, Jan. 9, 2019, in Fayetteville.

GAINESVILLE, Fla. — After weeks, maybe even months, of intentionally avoiding talk about the NCAA Tournament, Florida coach Mike White broke down and addressed it with his team Tuesday.

White figured it was better for his players to hear it from him than anyone else. Or everyone else.

"These guys are getting noise from a lot of other sources and people," White said. "They can hear my noise. Regardless of what this bracketologist says, or this fan tells you, or your classmate, or your aunt or uncle, none of that matters because they're not on the (NCAA) selection committee."

The only thing that matters for the Gators (17-14, 9-9 Southeastern Conference) is beating Arkansas (17-14, 8-10) in the SEC Tournament in Nashville, Tennessee on Thursday. It's probably the only way they reach the NCAA Tournament for the third consecutive year.

Florida has lost three straight, a slide that has White's team squarely on the NCAA bubble.

"If we were sitting here having won four or five in a row, we'd be talking about riding this momentum," White said. "It's easier to talk about the clean slate when you've lost three in a row, and that's what we're talking about — new opportunities in front of us."

The Gators are 3-11 in Quadrant 1 games — road wins at LSU, Alabama and Arkansas — and have a strength of schedule that ranks 28th in the nation. White's team also ranks 33rd in the NCAA's Evaluation Tool (NET) standings.

Another victory against the Razorbacks, who closed the regular season with three straight wins, would bolster Florida's resume and probably do enough to lock the team into the NCAA field.

The Gators were in each of their last three games — losses to Georgia, LSU (overtime) and Kentucky. The common thread in all of them: senior KeVaughn Allen struggled mightily.

Florida's leading scorer failed to reach double figures in four consecutive games — the second time he's done that in his college career. He has missed 26 of his last 31 shots from the floor, 18 of his last 21 from behind the 3-point line and scored just 18 points combined in those four games.

Throw in untimely turnovers and poor court awareness — he neglected to get off a shot at the end of overtime against LSU — and Allen is playing his worst basketball as his career nears a close.

White gave his players a two-day break in hopes of rejuvenating them physically and mentally, and believes Allen could benefit most. But the coach stopped short of digging too deep into Allen's psyche at this point in the season.

"I think you can talk about it to a certain extent, but you also have to be cognizant, too, of the confidence level of certain guys," White said. "You want to increase it, not decrease it. I don't want to freak anybody out. I don't want to make it worse than it is. I just think you got to be careful. He's struggling obviously. I haven't found the right button, but we're going to continue looking."

One potential positive: Allen, a Little Rock native, has played well while compiling a 6-1 record against his hometown team. In fact, the last time he had a four-game stretch like this — it was January 2018 — he responded with 28 points against Arkansas.

"Just keep talking to him, keep his confidence high," said point guard Andrew Nembhard, who was named to the league's All-Freshman Team. "I think he'll have a great tournament. I'm excited to see what he'll do to finish off his senior year."