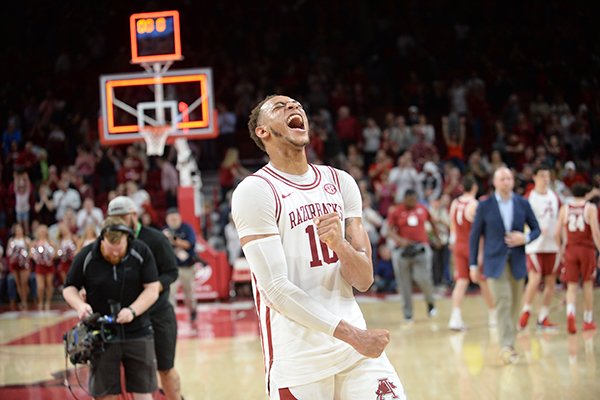 Arkansas forward Daniel Gafford celebrates at the final horn Saturday, March 9, 2019, during the Razorbacks' 82-70 win over Alabama in Bud Walton Arena in Fayetteville.

FAYETTEVILLE — Arkansas sophomore forward Daniel Gafford was named first-team All-SEC by the Associated Press and the league's coaches on Tuesday.

He was also selected to the All-SEC defensive team.

Gafford averaged 17 points on 66 percent from the floor and 8.7 rebounds during the regular season. In conference play, he put up 16.7 points and 8.6 rebounds in nearly 29 minutes per game.

The Razorbacks have had 11 players named first-team all-conference by the AP or coaches since joining the SEC before the 1991-92 season.

"I think he’s very deserving of it," Arkansas coach Mike Anderson said Monday. "When you look at the big picture and the things that Dan has done ... I thought he stepped up to the plate. He’s been on the top of everybody’s scouting report. Just think, two years ago he was in high school and now he’s being considered one of the better players not only in the SEC but in the country.

"I think his best basketball continues to be in front of him."

After recording three double-doubles as a freshman, Gafford has totaled 10 this season and scored 20-plus points in 11 games - seven times in SEC play. Gafford scored a career-high 32 points in the Razorbacks' home loss to LSU on Jan. 12 and finished with a career-high 16 rebounds in what was likely his final game in Bud Walton Arena on Saturday.

Gafford closed the regular season fourth in the SEC in scoring, first in rebounding and field goal percentage, and third in blocks per game.

Isaiah Joe, who broke the program's single-season record for 3-pointers in a season in Arkansas' win at Vanderbilt last week, was named to the All-SEC freshman team by the coaches. Joe averaged 14 points, good for second on the team, and made a league-best 106 3s on 42.9 percent from distance.

He also totaled 49 steals - ninth most in the conference - and led the Razorbacks in charges taken.

Gafford and Joe were among the 10 players named to the U.S. Basketball Writers Association All-District VII team as well. District VII covers Division I programs in Arkansas, Texas and Louisiana.