One final warm-up before SEC opener 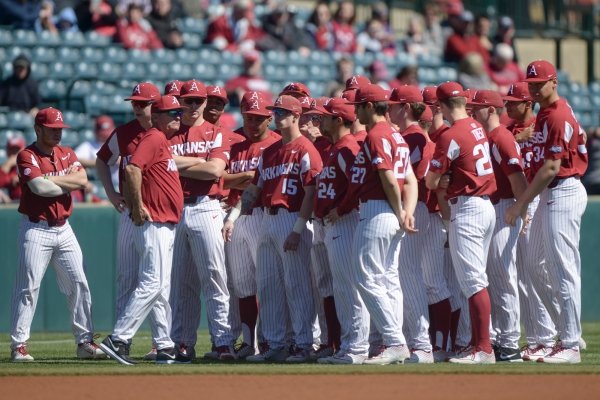 FAYETTEVILLE -- The No. 10 University of Arkansas baseball team doesn't have to worry about near-freezing temperatures for its two-game set against Western Illinois this week after battling the cold at nearly every home game at Baum-Walker Stadium this season.

The rain is another story. The Razorbacks (12-2) are scheduled to host Western Illinois (4-8) today at 6:30 p.m., if the projected storms dissipate, and again Wednesday at 3 p.m.

Western Illinois at No. 10 Arkansas

No matter the weather, Coach Dave Van Horn said he expects to throw freshman Patrick Wicklander and an array of his young guns at the Leathernecks.

"Not having to pitch him [on Sunday against Louisiana Tech] gives us an opportunity to start him, but he won't go very long," Van Horn said of Wicklander (1-1), a left-hander who lowered his ERA to 3.38 with scoreless one-hit ball through five innings of last Wednesday's 9-2 victory over North Carolina-Charlotte.

Wednesday's projected starter is still up in the air.

"Wednesday will definitely be a bullpen-type game," Van Horn said. "We could throw [Elijah] Trest out there. Whoever starts, I would tell you they probably wouldn't go more than two innings. ... Mostly younger guys is what we're talking about right now."

The Razorbacks follow the Western Illinois series with the SEC opener at home against Missouri on Friday as part of a season-high 13-game home stand.

Western Illinois (4-8), a member of the Summit League, has yet to play a home game at Macomb, Ill. The Leathernecks are coming off a series victory at Saint Louis University, but could not complete the sweep after winning 3-0 and 5-4 in the first two games, losing 8-2 in Saturday's series finale.

Arkansas improved its team batting average to .303 and lowered its team earned-run average to 3.27 in Sunday's 11-0 victory over Louisiana Tech to take two of three games from the Bulldogs.

The Leathernecks enter with a .184 team batting average and a 6.00 ERA.

"They like to run a little bit," Van Horn said. "Their batting average is down a little bit, but they did score some runs in the doubleheader ... on Saturday."

Van Horn got a little fired up defending freshman pitcher Jacob Burton for his beaning incident at the monthly meeting of the Swatter's Club on Monday at the Hilton Garden Inn in Fayetteville.

Because Hamilton ruled Burton was intentionally throwing at the batter, he cannot pitch again until Saturday and he cannot be at Baum-Walker Stadium for four games.

"We're never going to tell a pitcher to hit anybody, No. 1," Van Horn said. "Someone can get hurt.

"It got a little nuts because I felt like the way he [Hamilton] acted. He acted like there was a problem. There wasn't a problem.

"He doesn't know the two coaches are friends. ... From our standpoint, I don't want anybody thinking we're throwing at anybody. He [Burton] didn't mean to throw it there."

Van Horn told the Swatters Club members he expects Fletcher, Kjerstad and Martin to heat up with the weather.

"Martin was 0 for 17 and then hit one 100 miles," Van Horn said of Martin's three-run shot in the first inning Sunday. "We've still found ways to win when the big boys weren't hitting, the guys with the numbers. ... Now we're starting to get into conference play, they need to pick it up."