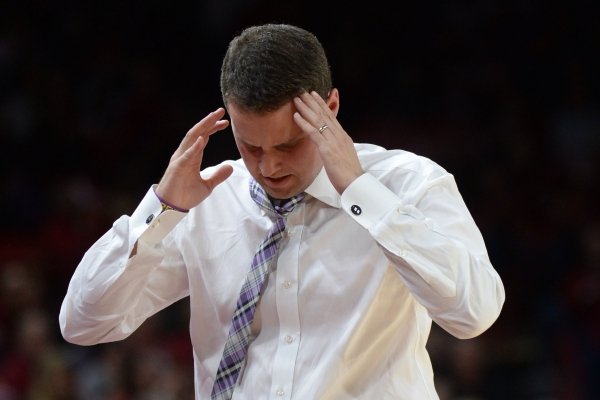 LSU coach Will Wade reacts to a foul call during play against Arkansas Friday, Jan. 11, 2019, during the first half of play in Bud Walton Arena in Fayetteville. Visit nwadg.com/photos to see more photographs from the game.

It seems a foregone conclusion that within months, maybe weeks, LSU will be vacating this entire men's basketball season, including its conference championship.

What the Tigers do this week at the SEC Tournament won't matter, although don't be surprised if they lose their opener to the winner of the Arkansas-Florida game.

The players have until Friday to stew about this sordid situation.

Coach Will Wade was suspended before the season finale with Vanderbilt for refusal to talk to LSU President F. King Alexander and Athletic Director Joe Alleva about FBI wiretaps that reportedly have Wade talking about his offer for point guard Javonte Smart, a Baton Rouge native.

Smart, a sophomore, sat out the Vandy game, as did Naz Reid, a freshman from Asbury Park, N.J., apparently for various injuries.

Smart and Reid were 5-star recruits.

LSU is good without them, but they were great with them.

The FBI probe into college basketball seems to be coming to a head and Sean Miller, Arizona's head coach, has been in and out of the conversation for months. But after a regular season-ending loss Saturday, he sounded like a guy with one foot out the door.

Fox Sports has announced it has hired Urban Meyer, the former Ohio State football coach, to work as an analyst in its studio this football season.

Meyer tried to do TV during the 2010 season after leaving Florida, and he was awful.

Maybe he'll be better, but more likely he's looking for something to do until he can coach again.

Four teams have punched their tickets to March Madness and one them, Gardner-Webb, will be making its first-ever appearance.

Also early in the season the Bulldogs lost to Arkansas State 77-69.

The conference tournament was played on Campbell's campus and Gardner-Webb won 79-74 and then avenged a 78-58 loss to Radford with a 76-65 victory to make the NCAA Tournament.

Since Zion Williamson's injury, Duke has gone 3-3, including two losses to North Carolina. But the freshman, who will most likely be a lottery pick in the next NBA Draft, might be back this week for the ACC Tournament.

If he is, the Blue Devils will be a No. 1 seed in the NCAA Tournament.

The Arkansas Softball Hall of Fame Board has announced its latest class of inductees:

The induction and annual Softball Hall of Fame banquet is May 23 at the Benton Special Events Center. Doors open at 9 p.m.

Also being honored are the All-Arkansas Men and Women's teams, and Glenn Brothers Trucking will receive team recognition.

Past inductees who have not received their Hall of Fame rings are also invited.

Admission is $30 per person, $300 for a table and can be purchased at Arsoftballhalloffame.com.

Last year's banquet was a sellout with 500 people in attendance, so it might be best to order tickets sooner than later.