A pat for Dan: Hogs' Gafford lives up to preseason billing 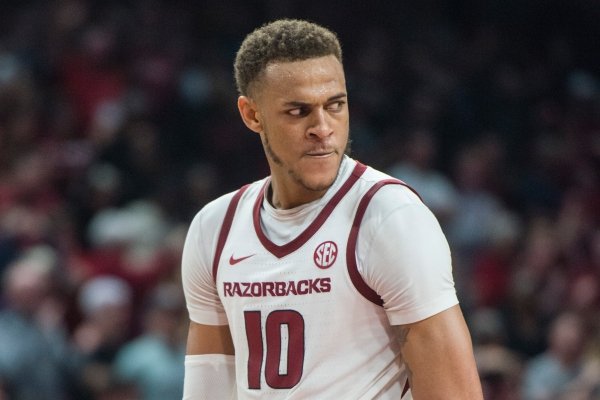 Arkansas center Daniel Gafford is shown during a game against Vanderbilt on Tuesday, Feb. 5, 2019, in Fayetteville.

FAYETTEVILLE -- In October, University of Arkansas forward Daniel Gafford downplayed being voted to the All-SEC first team in a preseason media poll.

"I don't really have a big reaction to it," Gafford said at SEC media day in Mountain Brook, Ala. "It's not like I'm going to give myself a pat on the back. It just makes me want to work harder so I can be picked All-SEC again at the end of the season."

Gafford can give himself that pat on the back now.

The 6-11 sophomore from El Dorado was voted All-SEC first team by both the media and coaches, it was announced Tuesday.

Gafford is the 11th Razorback voted an All-SEC first-team player since Arkansas joined the conference for the 1991-92 season.

Gafford was among five first-team picks by The Associated Press. Coaches voted him onto the eight-man first team. He also was picked by the coaches for the five-man SEC All-Defensive team.

"I think he's very deserving when you look at the big picture and the things that Dan has done," Razorbacks Coach Mike Anderson said of Gafford's All-SEC honors. "He's the focal point of what we do."

Gafford is averaging 17.0 points (fourth in the SEC), 8.7 rebounds (third) and 2.1 blocked shots (third). He's the only SEC player to rank among the top five in all those categories, and he is shooting a conference-leading 66.0 percent (208 of 315) from the field.

During Arkansas' three-game winning streak the Razorbacks will take into their SEC Tournament opener against Florida at noon on Thursday, Gafford averaged 22.0 points and shot 70.3 percent (26 of 37) from the field.

When Florida beat Arkansas 57-51 in Walton Arena on Jan. 9 in the Razorbacks' SEC home opener, Gafford had 9 points, 12 rebounds and 1 blocked shot.

"Daniel Gafford's playing as well as anybody in the SEC," Florida Coach Mike White said. "He's made a big jump over the course of this season. He's extremely long, has great hands, he's aggressive. I think he's a really tough kid.

"He's always the focal point of every scouting report against those guys. I feel like we did a good job and he had 9 and 12. I mean, that's how good the guy is."

Gafford is averaging 2.9 offensive rebounds to lead the SEC.

"He's a bear to keep off the glass, and he changes the game defensively," White said. "He can guard one through five. He switches onto point guards, and he alters and blocks shots at the rim.

Arkansas sophomore forward Daniel Gafford, who was voted an All-SEC first-team player by the coaches and media, has 10 double-doubles this season. Here’s a rundown:

"You always have to be cognizant of where he is on the court offensively and defensively."

Gafford scored 20 points and hit 7 of 9 shots in a 74-73 victory over Ole Miss in Walton Arena on March 2 when the Razorbacks ended a six-game losing streak.

"I had the scout for the Arkansas game, so I had a really in-depth look at [Gafford] watching all the games leading up to when we played them," Ole Miss assistant coach Ronnie Hamilton said. "You know he's athletic, but then you see him in person and he's even bigger and more athletic than he appears on film.

"He just presents a tough, tough matchup. You've got to figure out a way to limit his touches, because if he catches the ball deep he can just score over you so easily."

Before Arkansas won the teams' rematch, the Rebels beat the Razorbacks 84-67 at home on Jan. 19 when they held Gafford to 9 points on 2-of-6 shooting.

"I think what he's doing a lot better from the first game we played them is he's a lot more comfortable," Hamilton said. "We tried to double-team and send two or three guys at him, and he's passing well out of the post when that occurs.

"He's as tough a guy to compete against as there is in this league. He presents a tough matchup for everybody."

In two games against Vanderbilt this season, Gafford scored 28 and 20 points while making a combined 17 of 25 shots.

"It starts with Gafford," Vanderbilt Coach Bryce Drew said when asked about the Razorbacks' late-season surge. "He just impacts the game in so many different ways.

"When you need a basket, you can go to him inside. He finishes everything above the rim. Defensively, he's a force every possession."

Gafford scored a career-high 32 points in LSU's 94-88 overtime victory over Arkansas in Walton Arena on Jan. 12, but he might have played the best all-around game in his two seasons with the Razorbacks when he had 29 points, a career-high 16 rebounds, 2 assists and 2 blocked shots in their 82-70 victory over Alabama at home Saturday.

"Dan took it to another level scoring-wise, defensive-wise, rebounding the basketball," Anderson said. "He's had periods in some of the games where he hasn't played his best basketball, but it wasn't because of a lack of effort.

"Maybe we didn't do a good job of getting the ball to him, or maybe there were times he didn't finish well."

Gafford has led a team full of newcomers this season after playing with seven seniors last season.

"You think of last year and the role he was in," Anderson said. "It was totally different than this year, but I think he's stepped up to the plate.

"I think he's matured a lot in terms of being that guy. Because he's been on the top of everybody's scouting report.

"Two and three players are coming at him. There's been a lot of physicality. I thought for a period he hit the wall, but now it seems he's ready to play some really good basketball for us."

Along with having opponents focusing on him all season, Gafford has been scrutinized at games by large groups of NBA scouts.

"I don't really pay attention to eyes on me," Gafford said last week before the Alabama game. "I don't focus on my personal stats all that much.

"I just come out and play basketball and do what it takes to help my team get the win at the end of the day."

PLAYER OF THE YEAR

COACH OF THE YEAR