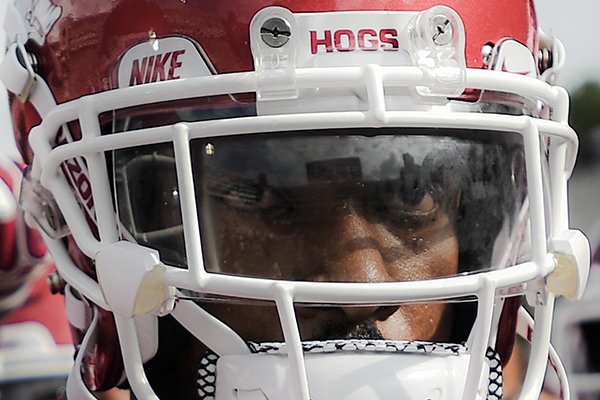 Arkansas defensive back Jarques McClellion prepares for a game against Alabama on Saturday, Oct. 6, 2018, in Fayetteville.

FAYETTEVILLE -- University of Arkansas cornerback Jarques McClellion came to Wednesday interviews with the Razorback "championship belt" draped over his shoulder.

McClellion and fellow defenders T.J. Smith and Kamren Curl said the defense retained the belt again after spring practice No. 7, meaning that unit is undefeated heading into a lengthy spring break.

"A lot of fumbles today," said Smith, who had one of the highlights of the day with a scoop-and-score touchdown.

"Coach Chief [Chavis] and coach [Ron] Cooper have been telling us in meetings to strip the ball, crank that lawn mower right," McClellion said.

"This is Brenden Young's belt, but I'm just holding it to show it to the world to let them know we're here," McClellion said.

Curl said cornerback Montaric Brown, who has had multiple interceptions in practices, pried the ball away that led to Smith's score.

"I believe it was a screen," Smith said. "Just got out there on the perimeter, saw the ball rolling, picked it up and took off."

Practice observers noted the fumbles largely came from a young group of walk-on running backs who have been added to the roster recently.

Running back Chase Hayden said the offense played well enough to win the belt in the first scrimmage.

"We didn't get the belt on Saturday, and I felt we should have got the belt," he said. "[The defense] had a couple of good days, but I felt last Saturday we won it."

Senior offensive tackle Colton Jackson had a brief response to how the offense looked Wednesday.

"We just didn't come out," he said. "We just weren't ready to go today. They just basically manhandled us. We've got to come back after spring break and not let that happen again."

Linebacker Andrew Parker was a new addition to the players in green (limited contact) jerseys, while running back Jordon Curtis was an upgrade to green after sitting out Monday's practice.

Running back Devwah Whaley, who ran well in Saturday's scrimmage, missed his second workout in a row with a minor injury. Safety Myles Mason also remained out.

Left guard Austin Capps was back after a class conflict kept him out Monday.

Quarterback Connor Noland, who has gone through three spring practices, was with the baseball team for Wednesday's 11-1 victory over Western Illinois.

Junior Chase Hayden was the only healthy scholarship tailback on both Monday and Wednesday this week, though converted cornerback Jordon Curtis did noncontact work in a green jersey.

"It's just an opportunity to get better," said Hayden, who added that now is a good time for spring break to help the dinged-up running backs get healthy for the second half of spring drills.

Hayden, coming off a lower leg injury last year, was slowed early in the season by a hamstring injury and wound up with 251 rushing yards on 57 carries.

"Probably last Saturday is the first time I've felt fully healthy for a while," Hayden said.

The Razorbacks added several walk-ons to the roster for Wednesday's practice, including at least three running backs.

Senior linebacker De'Jon "Scoota" Harris rolled around at the Razorbacks' pro day Monday on a knee-high scooter. Harris had successful surgery recently to put a small screw into his right foot and will not be engaged in practices through the rest of spring.

Coach Chad Morris said Harris will be a player-coach on the sideline for the younger linebackers.

Former SMU and current Denver Broncos receiver Courtland Sutton has been in Fayetteville to watch practices this week.

He remains close to the Arkansas coaches, including receivers coach Justin Stepp, who named his son Courtland in honor of the 6-3 receiver.

Arkansas resumes spring drills with practice No. 8 on Tuesday, March 26.