UA depth up front a departure from 2018 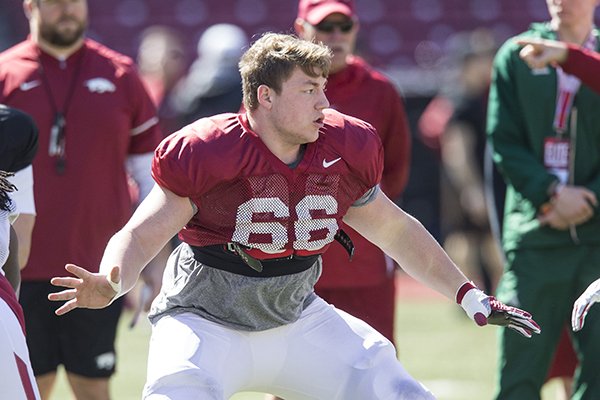 FAYETTEVILLE -- Projected first-team offensive linemen Shane Clenin and Noah Gatlin missed Saturday's first major scrimmage of spring for the University of Arkansas, but the offense did not turn into a hot mess.

When the same type of personnel issues arose last fall -- such as when left tackle Colton Jackson missed the first three games to recover from back surgery, while veterans Dylan Hays and Jalen Merrick were both headed toward medical hardships -- the Razorbacks were thrust into a bind. Often last season, the offensive line had 10 or fewer scholarship players available at practice.

Analysis The loss of three veterans with a lot of starts seems to indicate the Hogs will take a step back, but they cannot afford that. Not after ranking No. 117 in total offense (335.7 yards per game), No. 113 in scoring (21.7 points per game), No. 98 in rushing (143.3 yards per game) and No. 97 in sacks allowed (2.67 per game). The Razorbacks are hoping a more physical unit up front can better establish the run, and provide time and space for the quarterbacks to operate. Clary and Jackson need to show improvement from 2018 and carry the rest of the unit along with them.

The numbers are on the rise for position coach Dustin Fry.

"Right now we're sitting at about 11 or 12 guys, which is kind of what we had last year," said Gatlin, who returned from a illness this week. "But coming in the summer ... we'll have probably 18, 19 guys, which will be huge.

"It's good now that we've got a good two-deep, and a couple more guys that can functionally work and do what they're supposed to do."

With Clenin and Gatlin out Saturday, redshirt sophomore Dalton Wagner and redshirt freshman Ryan Winkel started on the right side of the line during the scrimmage. The first unit -- with the left tackle Jackson, left guard Austin Capps and center Ty Clary -- still had a little depth to it and managed to do some quality work, particularly in the early portion of the scrimmage.

Coach Chad Morris, Fry and offensive coordinator Joe Craddock know that reinforcing the offensive front while making improvements is critical for the Razorbacks' success in 2019.

The struggle for O-line depth early in camp last year resulted in Capps, now a senior, being switched from defensive tackle to guard. Now the 6-4, 311-pound mauler is in position to hold down a starting job.

Gatlin, who had been ill, made it back to practice this week. Clenin injured a foot and is lost for the spring, joining Kirby Adcock (hip) on the shelf.

The Razorbacks still can run two full units during team drills this spring, mostly thanks to the early enrollment of junior college transfers Myron Cunningham and Chibueze Nwanna, and preferred walk-on Drew Vest.

"I've been very, very pleased with Myron Cunningham," Morris said Monday. "I think Myron is really progressing every scrimmage. Every practice you're seeing something a little bit different out of him. I think he's definitely going to help us out. I think he's extremely farther ahead right now than we thought he would be, because Fry and I talked about that."

Jackson said the added depth and natural improvements should pay off.

"There's definitely more depth than we had last year with Chibueze and Myron coming in, and as soon as Shane and Audrey [Horn] and Kirby [Adcock] get back, it's going to be even better for sure," Jackson said. "I think everybody's getting better from last year, just working on technique and getting the new guys in and getting game speed reps ... especially going against an experienced defense like we have now. That can't do anything but make us better."

"We'll grade the film, but for the most part I was pleased, you know, just watching it from the sideline," Craddock said.

Gatlin said the offensive line was stressing the fundamentals this spring.

"Just going back to working on footwork and hand placement and punching, being able to read defensive linemen and kind of what they're going to do, pre-snap, so that way it's a lot easier on us," Gatlin said. "We've just got to do a better job of doing that, and we'll be a much better unit this year."

"I think Ty Clary is improving," Morris said. "I think the veteran player that he is now, you're seeing some of that show up. Austin Capps is moving better than he's moved.

"But, Myron Cunningham has stood out. Dalton Wagner's another one that I've been pleased to watch, a guy that's had a good six practices. I think that's a group that, again, we're getting some depth and some competition."