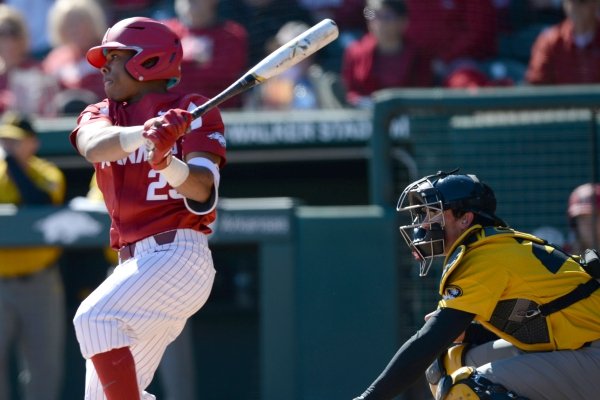 Arkansas left fielder Christian Franklin connects for a 2-run single against Missouri Saturday, March 16, 2019, during the fourth inning at Baum-Walker Stadium in Fayetteville. Visit nwadg.com/photos to see more photographs from the game.

FAYETTEVILLE -- Freshman Christian Franklin was the hitting and defensive star for the No. 10 Arkansas Razorbacks in a series-clinching victory over Missouri on Saturday afternoon.

Franklin hit a two-out, two-run single up the middle against Missouri left-handed ace TJ Sikkema, and he made a leaping catch of a foul ball on the edge of the left-field stands for the final out of the Razorbacks' 4-3 victory before a crowd of 6,573 at Baum-Walker Stadium.

Arkansas closer Matt Cronin has 6 saves in 8 appearances covering 9 innings with 3 hits and no runs allowed. … In the four games prior to Saturday, 12 Arkansas pitchers had combined for an ERA of 0.25, with one earned run allowed on 55 strikeouts, 10 hits and 10 walks for a WHIP of 0.556. … About 15 scouts have attended the first two games of the series, eager to see Isaiah Campbell and TJ Sikkema, among others. … Former Arkansas RHP Scott Tabor, a member of the 1979 College World Series runners-up, threw out the first pitch Saturday. … Heston Kjerstad was hit by a pitch in the fifth inning, his fourth consecutive game to reach base in that manner and his sixth in the past seven.

The University of Arkansas (16-2, 2-0 SEC) clinched its first conference series of the year while improving to 14-1 at home. The Tigers (11-7, 0-2) outhit Arkansas 7-6 but could not string together big innings after falling behind 4-0.

On Franklin's game-ending catch of Peter Zimmermann's foul ball, a young spectator had his glove up just over the retaining wall as Franklin sprinted into foul territory.

"It was right in front of my face," Franklin said. "Running over there I had an idea it was going to be a close play maybe, so I wanted to get over there and give myself the best chance to catch the ball.

"And as it was coming down, that fan was reaching over with his glove and luckily it went a little bit over his glove, and I was able to make that catch. There were a lot of things going on over there. Thinking about the wall, the fans, but I just tried to stay focused on the ball and watched it into my glove."

Said Arkansas Coach Dave Van Horn: "What a great catch. You never know what's going to happen. That was a big, strong kid at the plate. I was watching BP both days and he was launching balls. Anything could happen on a day like this when the wind is blowing out and the air is thin."

Arkansas freshman Connor Noland escaped a bases-loaded, no-out jam in the first inning with no runs allowed, but the freshman came up one out short of finishing the fifth inning to notch his first victory. Noland allowed 4 hits, a walk and 1 run while striking out 4 in 4⅔ innings to post his fifth consecutive no-decision.

"I was just trying to make it as far into the game as I could," said Noland, who threw 74 pitches. "I'm not too concerned about the wins and loss column. We'll let Kole handle that."

Matt Cronin had a 1-2-3 ninth inning for his sixth save.

"He's a good pitcher," Van Horn said. "I feel fortunate to beat him. But I thought our pitchers did a great job."

The Razorbacks chipped away at him while raising his ERA to 1.30. The Hogs scored on a throwing error and a sacrifice fly in the first and second innings before Franklin's big hit in the fourth.

"In conference games, you have to be sharp for nine innings," Missouri Coach Steve Bieser said. "We weren't very competitive with our at-bats. But what can you say about TJ? He didn't have his best stuff today, but still battled all the way through this game."

It took 13 innings for the first run-scoring hit in the series, and it was delivered by Franklin, who also drove in a run with a sacrifice fly in the second inning.

In the fourth, Casey Opitz was hit by a pitch to open the inning and advanced on a wild pitch. Matt Goodheart singled just over the second baseman's glove with no outs, but Optiz could not break off second on the play and wound up at third.

Sikkema struck out Jack Kenley, then fielded Jacob Nesbit's safety squeeze and got Opitz in a rundown. Nesbit and Goodheart were able to reach second and third.

Franklin fell behind 1-2, fouled off a pitch, then sent Sikkema's next offering right back through the box to score two.

"It was two strikes, and I was just looking for something to hit, and he left it over the middle, so I was able to put the barrel on it," said Franklin, who increased his team RBI lead to 19.

"That's a big hit," Noland said. "I mean, two extra runs on top of a two-run lead gave me extra confidence to go out there and throw strikes and let them put the ball in play."

Zimmermann doubled with one out in the fifth for the Tigers' first extra-base hit in the series. Leadoff man Josh Holt brought him home with a two-out single to chase Noland.

Luke Mann's RBI double and a run-scoring single by Chris Cornelius against Ramage pulled the Tigers within 4-3 in the eighth.

An action-packed first inning lasted 29 minutes and ended with Arkansas on top 1-0 even though Missouri had a better chance to score.

The Tigers loaded the bases with no outs against a shaky Noland on a walk, Mann's bunt single, and a dropped toss at second base by shortstop Casey Martin on a potential double-play ball.

Noland got a visit from pitching coach Matt Hobbs after throwing six balls in his first seven pitches.

"I was throwing the ball high," Noland said. "Just a little mechanical error. He just told me to settle down and settle in and throw strikes, and that really helped me."

Noland struck out Cornelius looking, then got a ground ball to second from Chad McDaniel. The Razorbacks could not turn a double play, but they were granted one when Kameron Misner was called out for sliding late and wide into second base on the force out.

"We were just fortunate their runner went way out of the line going after our shortstop," Van Horn said.

"We just let this thing slip away in the first inning," Bieser said. "That was a big blow to our team. We didn't respond very well to that adversity.

"The wind came out of our sails after not getting anything in the first inning. It came back to bite us and took us a while to get going. It was too little, too late."

The Razorbacks got a gift run in the bottom of the inning after Martin just beat the throw to first on a ground ball to the shortstop Cornelius. Martin stole second base with two outs and came around to score on Cornelius' errant throw to first on Dominic Fletcher's grounder.

The Arkansas freshman Nesbit had a single that led to a run in the second inning to extend his hitting streak to eight games and his on-base streak to 15 games. His one-out single followed Opitz's walk and Goodheart's single to load the bases. Franklin's sacrifice fly to deep right made it 2-0.