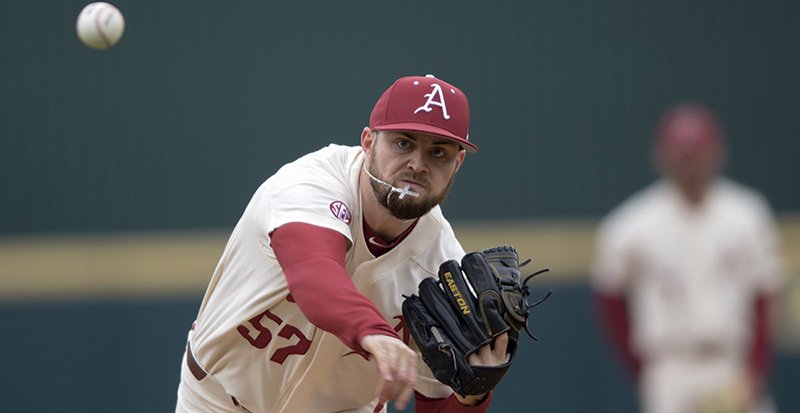 NWA Democrat-Gazette/Charlie Kaijo ALL BETTER: Arkansas Razorbacks Cody Scroggins (57) pitches during Sunday's game against Louisiana Tech at Baum-Walker Stadium in Fayetteville. Scroggins tore a ligament in his elbow two years ago against the Bulldogs, but he led the Razorbacks to an 11-0 win Sunday, striking out a career-high 11 in six innings on the mound.

Heston Kjerstad leads off the bottom of the ninth with a single to right for Arkansas. Curtis Washington, Jr., pinch runs for him. Dominic Fletcher then reaches first on catcher's interference.

Casey Opitz's RBI single then won the game when Curtis Washington, Jr., crossed the plate for the winning run.

Missouri relief pitcher Cameron Dulle finishes his second scoreless inning to send us to the ninth.

Jacob Kostyshock keeps Arkansas ahead 2-0 with a perfect eighth inning on the mound.

Arkansas' Matt Goodheart was issued a two-out walk and stole second, but was left stranded there when Jack Kenley fanned.

Kevin Kopps allows a couple of Missouri baserunners, but Jacob Kostyshock comes on in relief to keep the Tigers off the board.

Jack Kenley breaks up the perfect game, the no-hitter and the shutout with one swing. His homer puts Arkansas up 1-0 over Missouri in the sixth. Jacob Nesbit follows with a single, steals second with two outs and comes home on Heston Kjerstad's swinging bunt single and a wild throw home.

It was Kenley's fourth homer of the season and the Razorbacks' 18th.

LaPlante gets out of the inning with a shot right back at him.

Kopps is perfect in his first inning. Razorbacks still looking for their first base runner.

Missouri pitcher Tyler LaPlante remains perfect through five innings. He has fanned two while throwing 51 pitches, 35 for strikes and has fanned two.

Kevin Kopps headed to the mound for Arkansas to take off for Cody Scroggins ends up allowing no runs on three hits, fanning seven and walking a pair.

Arkansas pitcher Cody Scroggins allows a one-out single, but continues to keep Missouri scoreless as we head to the bottom of the fifth of a tie game.

Scroggins has thrown 84 pitches, 48 for strikes while fanning seven, walking two and giving up a trio of hits.

Missouri starting pitcher Tyler LaPlante nearly served up a bomb to Heston Kjerstad, but he has now pitched four hitless innings and retired all 12 batters he has faced. He has thrown 40 pitches, 28 for strikes and fanned one.

Missouri's Chad McDaniel get the first hit of the game in the top of the fourth and the Tigers proceeded to load the bases with one out. But Scoggins finishes off the last two batters with no runs plating.

Arkansas and Missouri both scoreless and hitless through three innings.

Missouri threatened with runners reaching via a walk and a Scroggins error, but the Arkansas pitcher got himself out of the frame by getting Luke Mann to ground out.

Missouri starter Tyler LaPlante has faced six Arkansas batters and has sent them all back to the dugout.

After hitting the first batter of the game, Scroggins has now fanned the last five batters he has faced. He fanned 11 in his start last week.

It was the second time in as many games that Scroggins had led off the game by drilling a batter.

Casey Martin, Heston Kjerstad and Trevor Ezell due up for the Razorbacks.

Arkansas will send out junior right-hander Cody Scroggins (1-0, 4.50 ERA) against Missouri left-hander Tyler LaPlante (1-1, 3.43) as the Razorbacks look to sweep their SEC opening series with the Tigers.

Arkansas won 2-0 on Friday night and 4-3 on Saturday afternoon.