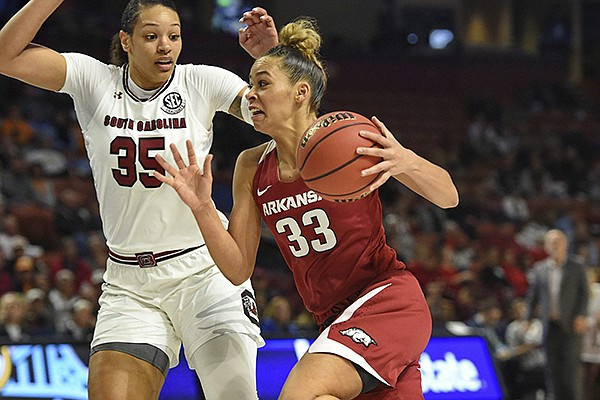 FAYETTEVILLE — Arkansas' women's basketball team did not make the cut for the NCAA Tournament in coach Mike Neighbors' second season, but it still has something to play for this postseason.

The Razorbacks (20-14), who made a thrilling run to the Southeastern Conference Tournament final earlier this month after losing six of seven games to close the regular season, will host Houston in the first round of the WNIT at 7 p.m. on Thursday in Bud Walton Arena.

It is Arkansas' seventh WNIT appearance and first since 2013.

"We feel like there are three (NCAA Tournament) spots for five teams and we're one of them," Neighbors said last week of Arkansas' NCAA Tournament chances. "So yeah, if we don't see our name on Monday it will hurt, but we won't be all 'woe is me' and go into the NIT half-focused and lose a game to a team that's fully focused. I wouldn't dare put a team in that situation.

"Our team still wants to keep playing. They are playing their best basketball, and they want to keep doing it as long as they can."

After beating Georgia, South Carolina and Texas A&M to reach the SEC championship game for the first time, Arkansas was among the final eight teams - Auburn, Indiana, Ohio, Tennessee, TCU, UCF, Princeton - the NCAA Tournament selection committee was considering for an at-large bid.

Princeton, Indiana, Auburn and Tennessee, which the Razorbacks beat 80-79 in Knoxville, Tenn., on Jan. 21, all received bids.

Sophomore guard Chelsea Dungee leads the Razorbacks in scoring at 20.2 points per game on 40 percent from the floor. She scored an SEC Tournament record 103 points in Arkansas' four-game run in Greenville, S.C., and was named to the all-tournament team.