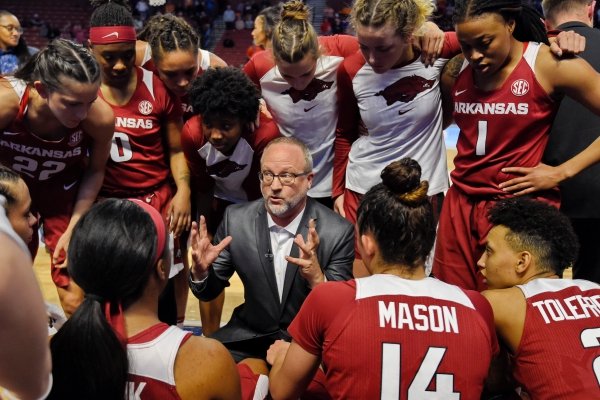 FAYETTEVILLE -- It's been over a week since the Arkansas women's basketball team made its impressive run to the SEC Tournament final, but its NCAA Tournament hopes got more tangible Sunday.

The Razorbacks (20-14) were one of eight teams announced on ESPN vying for the final four spots in the NCAA Tournament by committee chairwoman Rhonda Lundin Bennett. The complete 64-team field will be announced at 6 tonight on ESPN.

Tennessee and Auburn joined Arkansas in that final eight, along with Indiana, Ohio, Princeton, Central Florida and Texas Christian.

Arkansas Coach Mike Neighbors, who spent time Sunday trying to predict the field himself, found a television to watch the unveiling. But he narrowed Arkansas' odds a bit.

"Indiana and Central Florida are in, I think," Neighbors said. "I think there's four teams for two spots really. I think a 50-50 chance is better than any of us expected at the beginning of the year, so we'll take it."

Bennett acknowledged a list of criteria such as conference record, RPI, strength of schedule, a team's finish at the end of the season and performance in their conference tournament will be used in making final selections.

The Lady Vols (59) and Arkansas (67) have the lowest RPI of the eight. Central Florida (26-6) has the highest RPI of the eight teams at 15, losing to No. 2-ranked Connecticut in the final of the American Athletic Conference tournament.

Neighbors and the team will get together to watch the tournament selection show tonight, but he's let the players have some time off over the past week.

"We only practiced twice," Neighbors said. "I tried to let them have a little spring break this week that wasn't on the books, hoping we will be busy during the scheduled spring break."

The Razorbacks (20-14) became the first No. 10 seed in SEC tournament history to reach the finals before falling to Mississippi State a week ago. They beat Georgia, South Carolina, and Texas A&M -- teams it lost to during the regular season -- along the way.