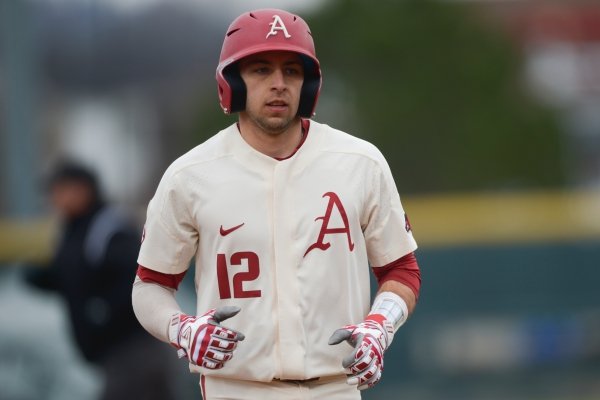 FAYETTEVILLE -- University of Arkansas catcher Casey Opitz couldn't have picked a better time to get his first hit of the weekend.

Opitz hit a 1-2 curveball from Cameron Dulle for a single to right field that scored Curtis Washington from second base in the bottom of the ninth inning and lifted the Razorbacks to a 3-2 victory over Missouri on Sunday at Baum-Walker Stadium.

Before Opitz's game-winning hit, he had reached base four times in the series on three walks and a hit by a pitch, but was 0 of 7.

"It was so nice," Opitz said the game-winning hit. "It was much better than walking."

Missouri designated hit a one-out, 1-1 fastball from Jacob Kostyshock for a two-run home run in the top of the ninth to tie the game 2-2.

"Kosty's pitch kind of two-seamed into the barrel and that thing got hit pretty hard," Opitz said. "But, you can't let that get to you.

"We've got [at-bats] the next half-inning, so we get up there and we do what we did."

After Kostyshock (1-1) kept it a tie game by getting a groundout and line out, Heston Kjerstad singled leading off the bottom of the ninth.

Ezell popped out to Missouri catcher Chad McDaniel trying to sacrifice, but Washington dove back to first base in time to avoid a double play.

"Trevor may be the best bunter on our team," Van Horn said. "It happens. It's baseball. It's a round ball and it's hard to control it with that bat sometimes.

"Just a really good job by Washington getting back. He barely got back."

Washington got to second base after Dominic Fletcher was awarded first on a catcher's interference call when his bat hit McDaniel's glove on a swing attempt.

"It looked like [McDaniel] got really tucked up in there on that breaking ball that they were trying to throw Fletcher, and Fletcher was just trying to shoot it the other way," Van Horn said. "He waited for the ball to get deep and ended up hitting the catcher's glove."

Dulle got ahead of Opitz 0-2 with two called strikes on curveballs. Opitz then took a curveball for a ball before getting his hit on a fourth consecutive curveball.

"Man, that was a tough at-bat," Missouri Coach Steve Bieser said. "He took that breaking ball just off the corner that was a borderline strike, and then he came back, and he got the breaking ball right there in the middle of the plate and was able to put a good swing on it. He just did a good job."

Opitz said he wasn't necessarily looking for another curveball.

"At that point, any ball that was in the zone I was going to swing at it and hopefully get a hit," he said. "I was watching [the ball after hitting it] and kind of freaking out.

"But they were playing up the middle a lot, so I knew once I pulled it that it had a pretty good chance of sneaking through there."

Missouri starter Tyler LaPlante retired the first 15 batters he faced before Jack Kenley led off the bottom of the sixth with a home run over the right-field fence to give Arkansas a 1-0 lead.

"Kenley got hold of a fastball," Van Horn said. "It looked like [LaPlante] tried to slip one by him after a couple of breaking balls and a changeup.

"Jack didn't miss it. That gave us a little momentum."

Trevor Nesbit then singled, went to second on a wild pitch and scored with two outs to make it 2-0 when Kjerstad beat out a grounder for an infield single and first baseman Tony Ortiz made a wild throw home.

"Everybody stopped, and when we tried to re-engage, we just had a high throw," Bieser said. "It was a tough deal for us."

Nesbit was sent home by third base coach Nate Thompson, but he stopped running and was between third base and home plate before Ortiz's error.

"Thank goodness they threw the ball away," Van Horn said. "We needed that run. Two runs over one is huge."

"Scroggins was really good," Van Horn said. "Really the first three innings his stuff was electric. He was throwing the ball in the mid 90s with a plus-plus changeup and a really good slider and racked up a lot of strikeouts. But also his pitch count got up because of that."

After Scroggins threw 84 pitches, Kevin Kopps came into the sixth inning. He retired the side in the sixth, but Missouri got runners on first and second base with two outs in the seventh. Kostyshock then struck out Luke Mann swinging on a 3-2 pitch to end the threat.

The Razorbacks won the first two games against Missouri 2-0 and 4-3. For the series, Arkansas' pitchers combined for 32 strikeouts and seven walks.

"It was unbelievable what they were doing out there -- every single guy," Opitz said. "It was a lot of fun being back there with this kind of staff."

"There's no doubt that they're a top-10 club," Bieser said. "They're pitching very well, and they're playing very well.

"You might think their offense wasn't doing much against us, but our pitching staff is pretty salty and can get the job done on the mound."

SHORT HOPS By taking three games from Missouri, the Razorbacks opened SEC play with a sweep for the third consecutive season. They swept Mississippi State in 2017 and Kentucky in 2018 … Arkansas third baseman Jacob Nesbit had a single in the sixth inning Sunday to extend his hitting streak to nine games. He has reached base in 16 consecutive games and 18 of 19 games this season … Arkansas leads its series against Missouri 21-14 … Missouri center field Kameron Misner, a preseason All-American who was hitting .393 coming into the series, was 0 for 12 with 6 strikeouts … Cody Scroggins, the Razorbacks’ starting pitcher Sunday, went went five scoreless innings to lower his ERA to 3.32. … Arkansas went 12-1 on its 13-game homestand. The loss was to Louisiana Tech 12-7.