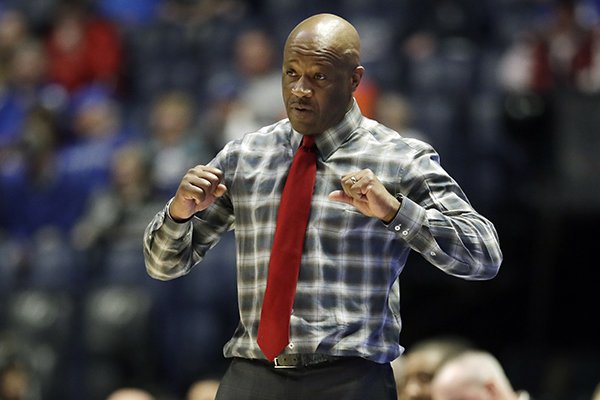 Arkansas head coach Mike Anderson signals to his players in the second half of an NCAA college basketball game against Florida at the Southeastern Conference tournament Thursday, March 14, 2019, in Nashville, Tenn. Florida won 66-50. (AP Photo/Mark Humphrey)

FAYETTEVILLE -- The season isn't over for the University of Arkansas men's basketball team.

The game will be televised on ESPN2.

The Friars are playing at home because they're a No. 4 seed and the Razorbacks are a No. 5 seed.

The Arkansas-Providence winner will play the winner of Tuesday night's Indiana-St. Francis game in Bloomington, Ind.

Indiana, which lost at Arkansas 73-72 on Nov. 18, will play at home through the NIT's first three rounds -- if it advances that far -- because the Hoosiers are a No. 1 seed. The NIT semifinals and championship game are played in New York.

Arkansas is playing in the postseason for the fifth time in the past six seasons, including three NCAA Tournament appearances and two NIT appearances.

Providence finished 7-11 in the Big East to tie for eighth with Butler and DePaul.

The Razorbacks and Tide are the only SEC teams in the 32-team NIT field.

Among common opponents between Arkansas and Providence this season, the Friars beat South Carolina 76-67 at a tournament in Connecticut and won 71-65 at Texas. The Razorbacks lost to Texas 73-71 in overtime in El Paso, Texas, to open the season and lost 77-65 at South Carolina.

WHEN 8 p.m. Central on Tuesday

The Friars played in the NCAA Tournament the previous five seasons under Coach Ed Cooley, who is 162-109 in his eighth season at Providence.

The Razorbacks will play the Friars for the fourth time and for the second time at Providence, which leads the all-time series 2-1.

Arkansas is making its fourth NIT appearance. The Razorbacks also played in the tournament in 1987, 1997 and 2014.

Arkansas beat Arkansas State University and lost at Nebraska in 1987; beat Northern Arizona, Pittsburgh and UNLV at home to advance to New York, where the Razorbacks lost to Michigan and Connecticut in 1997; and beat Indiana State at home and lost at California in 2014.

Making the NIT means Daniel Gafford, Arkansas' 6-11 All-SEC first-team sophomore forward, will play at least one more game for the Razorbacks. He is projected as a first-round NBA Draft choice.

Freshman guard Isaiah Joe, who has hit an Arkansas record 108 three-point baskets, is five shy of the SEC freshman record of 113 by Jamal Murray during the 2015-16 season.

The Razorbacks won their final three regular-season games before losing to Florida 66-50 in the SEC Tournament in Nashville, Tenn., on Thursday.