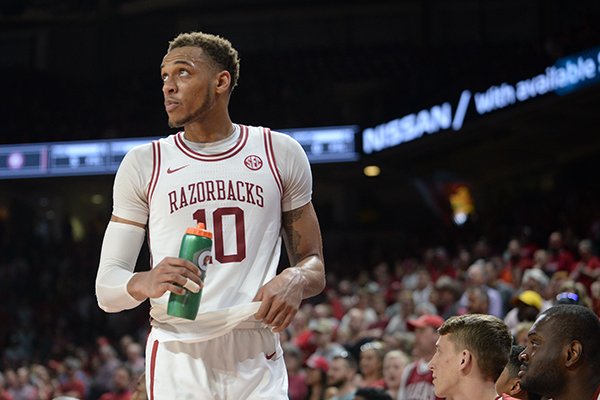 Arkansas center Daniel Gafford walks to the bench during a game against Alabama on Saturday, March 9, 2019, in Fayetteville.

FAYETTEVILLE -- If the University of Arkansas basketball team is going to make a run in the NIT, the Razorbacks will have to do it without their best player.

Daniel Gafford, Arkansas' 6-11 sophomore forward from El Dorado, has declared for the NBA Draft, will sign with an agent and won't play in the NIT, UA Coach Mike Anderson announced Monday.

"[Gafford] could have left last year and had an [NBA] opportunity, but he came back, developed and got better," Anderson said. "I think he's going to be a first-round draft pick.

"I'm supporting him in his endeavor. He came here with a dream, and he's going to have an opportunity to realize it."

The decision by Gafford -- a first-team All-SEC pick -- to skip the NIT is following a trend set by football players in recent years choosing to sit out bowl games that aren't part of the playoffs so they don't risk an injury that could affect their draft position.

"I've always been of the opinion that you finish what you started," Anderson said when asked his reaction to Gafford missing tonight's game.

Asked if that meant he was upset by Gafford's decision, Anderson stressed that's not the case.

In an Arkansas news release, Gafford thanked Anderson and the coaching staff for two great years of helping him develop as a player and person.

"It's been a fun ride, but the time has come for me to move on to the next stage of my career and declare for the NBA Draft," Gafford said in a statement. "Growing up in this state, I dreamed about playing at the University of Arkansas.

"It has been an honor to wear that jersey and represent the state."

Gafford also thanked the UA, the fans and his teammates.

Many fans posted messages on Twitter supporting Gafford, but he also responded to some negative feedback.

"No matter how much hate is thrown my way, I'm a Hog for life," Gafford tweeted. "Never will forget where I came from. I will always remain Humble and Hungry."

"I think we'll have some guys that can fill in the gaps and we've seen times when Dan wasn't out there on the floor, and these guys had a chance to showcase what they're capable of doing," Anderson said. "So we're looking forward to the opportunity to have a chance to go in and play for a championship."

The Razorbacks (17-15) at times have played well with Gafford on the bench.

Arkansas lost 67-64 at Texas Tech, but led 33-30 at halftime despite Gafford playing 7 minutes in the first half because of foul trouble and scoring 2 points on 1-of-1 shooting.

Kentucky beat Arkansas 70-66, but the Razorbacks led 39-28 at halftime despite Gafford being limited to 6 points and 9 minutes because of foul trouble.

On the season, however, the Razorbacks are much better when Gafford plays.

Arkansas has outscored its opponents by 206 points with Gafford on the court, according to the advanced analytics website HoopLens.com, and has been outscored by 123 without him.

"I just think it's a team sport," Anderson said when asked his response to those who believe the Razorbacks have no chance to beat Providence without Gafford. "That to me is what it's all about.

"Obviously, one guy can't do what Daniel did for our basketball team, but collectively with guys banding together, I think we'll be a good team."