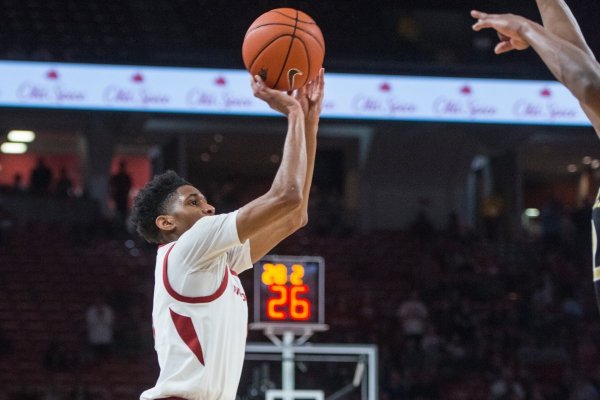 Isaiah Joe, Arkansas guard, makes a three-point shot in the first half vs Vanderbilt Tuesday, Feb. 5, 2019, at Bud Walton Arena in Fayetteville.

FAYETTEVILLE -- Freshman guard Isaiah Joe, who has hit a University of Arkansas record 108 three-point baskets this season, will need to show a deeper range tonight in the NIT against Providence if he's to add to that total.

The NIT is implementing several rules changes, including pushing the three-point line back from the NCAA range of 20 feet, 9 inches to the International Basketball Federation's 22-1 1/4.

"He thinks so anyway," Arkansas Coach Mike Anderson said with a smile when asked if Joe can hit three-pointers from the international distance. "He and Mason [Jones] think they have that kind of range."

Other rules changes for NIT games include:

• 30-second shot clock resetting to 20 after an offensive rebound.

• Team fouls resetting at the 10-minute mark of each half.

• No 1-and-1 free throws.Teams will shoot two bonus free throws after the fifth team foul of each 10-minute segment.

• Teams being awarded two bonus free throws if a foul is committed with under two minutes remaining in each half if that foul occurs before the fifth team foul of the segment.

• Team fouls will reset in overtime periods, and teams will shoot two free throws beginning with the fourth team foul.

Anderson said the rules should help open up the floor and create more chances to cut to the basket.

"Hopefully, it will work to our advantage," he said. "We've just got to make shots, though."

"It's probably 50-50 right now in terms of if he'll play," Anderson said. "He's had a couple of days off, so hopefully some healing has taken place. Hopefully, he's ready to go."

"We've seen Keyshawn have some pretty good moments for us," Anderson said. "He plays great defense, and offensively you can see what he's capable of doing. If he can play, that would be a big-time addition for us."

Daniel Gafford's decision not to play in the NIT might mean significant playing time for Ethan Henderson, a 6-8 freshman from Little Rock Parkview who has played just 28 minutes in 10 games.

"I want to see Ethan be more assertive, be more aggressive," Arkansas Coach Mike Anderson said. "Defensively, I think he can do some things. I think he's got to be engaged the whole time he's out there on the floor.

"There are days in practice where you go, 'Whoa, why is this guy not playing?' Then there are some days you go like, 'I see why.' I think that's just about consistency.

"When you look at this team, you've got a lot of that. Even as we've played you've seen that. We've been in games up to 25 to 30 minutes. And then the inconsistency of not finishing games. But that's part of the process."

Providence will be the third Big East team Arkansas has opened postseason play against in as many years.

Providence is making its 20th NIT appearance and has a record of 17-11. The Friars won NIT championships in 1961 and 1963. They're in the NIT for the first time since 2013 after making five consecutive NCAA Tournament appearances.

Arkansas is playing in the NIT for the fourth time and has a 5-4 record. The Razorbacks' most recent NIT appearance was in 2014. They reached the NIT Final Four in 1997.

Glad to be here

"If our excitement level is going off the practice that we had, we'll be good," Friars Coach Ed Cooley told media in Providence on Monday. "The teams that are excited about playing in this tournament for the most part are the teams that can advance."