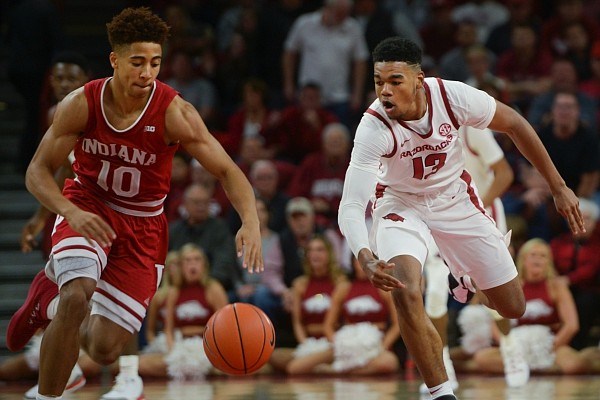 FAYETTEVILLE — Arkansas and Indiana will meet for the second time this season on Saturday at 11 a.m. in Bloomington, Ind.

The second-round NIT game will air on ESPN. The winner will move on to play either Clemson or the winner of Wednesday's Furman/Wichita State game on March 26 or 27.

Arkansas defeated Indiana 73-72 in Bud Walton Arena on Nov. 18. Daniel Gafford, who declared for the NBA Draft on Monday and will not play in the NIT, scored a game-high 27 points and grabbed 12 rebounds in the win.

Isaiah Joe, who finished with 12 points in the Razorbacks' win over Providence on Tuesday, added 13 points against the Hoosiers and Mason Jones contributed 11 to go with seven assists and zero turnovers. That day, Jones became the first Arkansas player since Julysses Nobles in 2012 to finish with seven assists and zero turnovers in 35-plus minutes.

Langford, who missed the Hoosiers' game Wednesday, is questionable for Saturday with a back injury he suffered early in the team's Big Ten Conference Tournament loss to Ohio State on March 14.

"In talking with Romeo, he wants to be out there and play," Indiana coach Archie Miller said Tuesday after the Hoosiers' first-round NIT win over Saint Francis (Pa.). "We're hopeful we can get him back. ... When he's ready to play he'll obviously get back to work."

Arkansas is 2-1 all-time against Indiana, beating the Hoosiers earlier this season and in the first round of the 2008 NCAA Tournament in Raleigh, N.C. The Hoosiers' lone win came during the 1949-50 season.