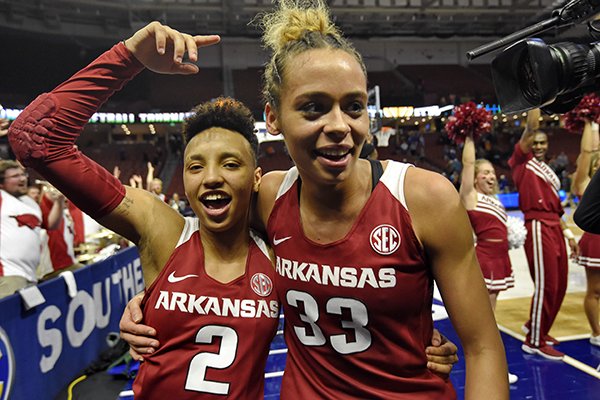 FAYETTEVILLE -- The University of Arkansas women's basketball team won at Tennessee 80-79 on Jan. 21 in the teams' only meeting this season, but the Lady Vols edged the Razorbacks when it came to getting in the NCAA Tournament.

Arkansas and Tennessee were among seven teams competing for the last four spots in the 64-team field, according to the NCAA Tournament selection committee.

The Lady Vols (19-12) got into the NCAA Tournament from that final seven along with Auburn, Central Florida and Indiana.

Arkansas (20-14) got strong consideration from the selection committee by upsetting Georgia, South Carolina -- ranked No. 12 in The Associated Press poll -- and No. 17 Texas A&M to reach the SEC Tournament Championship Game for the first time before losing to No. 5 Mississippi State.

The Razorbacks accepted a WNIT bid and will play Houston (15-15) at 7 p.m. Thursday in Walton Arena.

"A lot of emotions with it, because we were so close [to making the NCAA Tournament]," Arkansas Coach Mike Neighbors said Tuesday. "I've been told by many people that we were the last team talked about."

Tennessee, which has won eight national titles, is making its 38th consecutive NCAA Tournament appearance. The Lady Vols are a No. 11 seed.

"I look at it head-to-head," Neighbors said of Arkansas winning at Tennessee. "Everything else was about even. They might have had more top 50 wins than we did, but we had more top 25 wins."

Arkansas went 2-7 against top 25 teams -- splitting with South Carolina and Texas A&M -- and 2-10 against Top 50 teams with losses to Mississippi State twice, No. 11 Iowa State, Kentucky, No. 23 Arizona State, Missouri twice and Auburn.

"Maybe [Tennessee's] strength of schedule was a little bit better, but it wasn't that much better," Neighbors said. "So I don't know if it was their reputation, but when it gets down to a tie, every place that I've ever played whether it was the backyard growing up in Greenwood or in the SEC, when things are that even you look at what happened head-to-head -- and we won in Knoxville."

Tennessee is 8-10 against conference teams, including 1-1 in the SEC Tournament. Arkansas is 9-11 against SEC teams.

"I know the metric that I was told was top 50 wins," Neighbors said. "And [Tennessee] had more than we did."

"With at-large selections, we talk about the body of work," Rhonda Lundin Bennett, chairman of the NCAA selection committee, said on ESPN2. "We really felt that Tennessee, as well as other teams in our last four in, had significant wins.

"So that body of work, those significant wins, were the determining factors in making them an at-large selection."

Neighbors said he understands why Tennessee is in the NCAA Tournament.

"I would have thought we both should be in," he said. "That's what I fought for. I think Tennessee definitely is a NCAA Tournament team, but I think we are, too."

"I thought those things would catch up to us eventually, and they did," Neighbors said. "But I don't know if you really can deal with it until you see that bracket come up and you're not in it."

Arkansas is in postseason play for the first time since making the 2015 NCAA Tournament.

"It was definitely heart-breaking, especially for me," Razorbacks forward Bailey Zimmerman said of not being included in the NCAA Tournament field. "I'm a senior and I've never been to the NCAA Tournament and I really wanted to go. But I've also never been to the WNIT, and we definitely have a shot at winning this, so I'm extremely excited about it.

"Coach gave us a pep talk. He said, 'Hey, we can win this thing. Let's prove them wrong and show we should have been in the [NCAA] Tournament.' "

Junior guard Alexis Tolefree said the Razorbacks are excited to play in the WNIT after putting the disappointment of not making the NCAA Tournament behind them.

"We have a chance to play in the WNIT," Tolefree said. "That's a big deal, because not many teams are still playing right now."

Neighbors said the Razorbacks are fired up to play in the WNIT.

"You can't go into this thing with regrets or looking back or being frustrated," Neighbors said. "The kids are ready and so are the coaches -- after we vented to whoever we vent to.