After break, it's back to work for Hogs 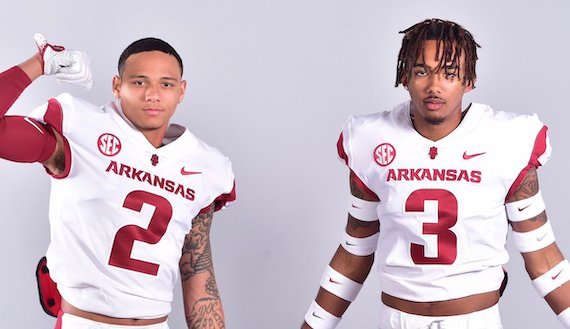 As soon as the Arkansas football coaches return from spring break this weekend, it will be right back to work preparing for the 2019 season and the 2020 recruiting class.

The Razorbacks have eight more spring practices left, including the Red-White game on April 6 and one practice scheduled the following Monday.

That April 5-7 weekend will also be the first when Arkansas can begin hosting current juniors on their official visits, something it is allowed to do beginning April 1 and continuing through June 26.

Because 20 members of his 2019 class signed in December, Arkansas coach Chad Morris was able to get a jump on the next class.

"It allowed us to really dive into 2020 recruiting, 2021 recruiting and just start putting our board together," Morris said. "Then it allowed me as a head coach to get out into schools and not feel as rushed to get into a home visit at night."

Arkansas will have Bryant defensive end Catrell Wallace (6-foot-6, 215 pounds) and other targeted prospects in unofficially on March 30. It used the Feb. 6 second national signing date as a time to make contact with its top 2020 prospects.

"We were on the phone with, I bet we've talked to 40-45 of them already today, the 2020s, and letting them know that a year from right now is their day," Morris said.

Thompson and Polk were in Fayetteville for the Razorbacks' prospect day March 9 that brought about 80 elite players in the 2020, 2021 and 2022 classes on campus.

That group included prospects from Arkansas, Texas, Oklahoma, Tennessee, Missouri and Louisiana, many of the states in what Morris calls the program's footprint.

Thompson, who had 95 tackles as a sophomore, says he has a top three of Arkansas, LSU and TCU while Polk's stated top three are Arkansas, Houston and Baylor.

Polk is slated to be an early enrollee. He had 37 catches for 700 yards and nine touchdowns as a junior and 40 catches for 667 yards and six scores as a sophomore.

Dixon had 78 catches for 1,184 yards and nine touchdowns last season for Carthage (14-1) and has a top two of Arkansas and Texas and also has offers from Oklahoma State, TCU, SMU and others.

Horace had 29 receptions, 462 yards and nine touchdowns as a junior and has offers from Arkansas, Nebraska, Baylor, Texas Tech, Houston and Oklahoma State.

Only one of those teams is in the SEC, which intrigues Horace. He was part of the talent-filled group at Arkansas on March 9.

"Leaving Texas is leaving Texas," Horace said. "I'm not a die-hard Texas person. Playing in the SEC, that would be amazing."

One of the other 2020 prospects likely to take an official visit this spring or summer is Highland Park quarterback Chandler Morris, the son of the Arkansas coach.

Chandler Morris led Highland Park to a third straight Texas 5A Division I state title last season by throwing for 4,055 yards and 46 touchdowns with only six interceptions while rushing 131 times for 652 yards and 19 scores.

Morris, who earned an invite to the Elite 11 Finals being held at The Star in Frisco on June 28-30, has offers from Arkansas, Clemson, Oklahoma, Auburn, SMU, Kansas, Indiana, Colorado and others. He will make an early decision.