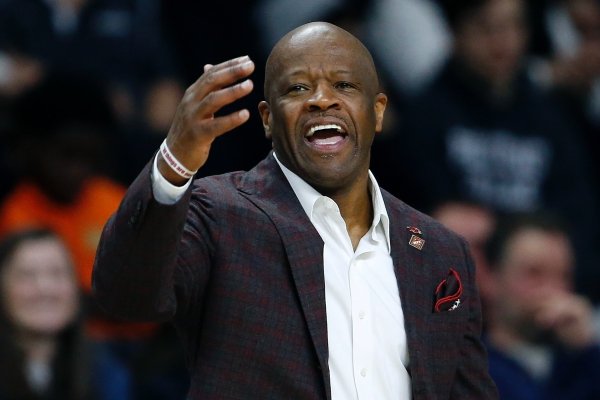 FAYETTEVILLE -- The University of Arkansas basketball team got a glimpse of life without Daniel Gafford on Tuesday night in Providence, R.I.

For one game at least, it looked pretty good.

It was the first game the Razorbacks (18-15) played the last two seasons without Gafford, the 6-11 All-SEC first-team sophomore forward who announced Monday that he had declared for the NBA Draft and would skip the NIT.

"We knew that because we lost Dan that we lost a lot of points and a lot of rebounds and everybody had to step up," sophomore forward Gabe Osabuohien said in a UA radio interview. "It wasn't going to be just one person stepping up.

"Everyone had to step up in everything we do. And if we did, we'd come out victorious."

Chaney had career-highs of 14 points and 7 blocked shots along with 5 rebounds and 2 assists in 28 minutes off the bench before fouling out.

"How about Reggie Chaney?" Anderson said. "He was like a wrecking crew out there, blocking shots and coming up with tough, tough rebounds."

"Ethan Henderson is a guy who hasn't played a whole lot," Anderson said. "But now guess what? His time comes and he stepped up tremendously for us."

"My approach to the game was I knew we all had to have confidence in each other," Osabuohien said. "We all played with energy and played together.

Arkansas, a No. 5 seed, advanced to play at No. 1 seed Indiana at 11 a.m. Central on Saturday in Bloomington, Ind. The game will be broadcast on ESPN.

It is a rematch of the teams' regular-season game in Walton Arena on Nov. 19 when the Razorbacks beat the Hoosiers 73-72.

"To their credit, I think they were more excited to play than my guys," Providence Coach Ed Cooley said of the Razorbacks in his postgame news conference. They had a little more pop in their step."

Osabuohien said the Razorbacks are excited to be playing in the NIT.

"Definitely," he said. "There is a championship involved, and any time you get to play for a championship you've got to give it 100 percent. We came out here wanting to win."

Anderson said his players had plenty of motivation.

"Having the adversity of one of your better players to not play, you wondered how your guys would come out and perform," he said. "True to form, our guys came out and they wanted to play. And they didn't want to just play, they wanted to win."

The Razorbacks had more turnovers (14) than the Friars (9), but Arkansas still got the fast tempo it wanted with pressure defense.

"When we watched them on film, the Big East teams didn't press up on them like we can," sophomore guard Mason Jones, who led Arkansas with 18 points, told reporters after the game. "We knew we'd spread it out and outrun them, keep pushing the pedal."

An NIT rule that moved the three-point line from the NCAA's 20 feet, 9 inches to the international distance of 22-1 3/4 didn't bother the Razorbacks.

Anderson said he didn't think Embery-Simpson would play because of an ankle injury, but he got in for six minutes.

"I was so proud of him," Anderson said. "If you had seen him [Tuesday morning] in our shoot-around, there was no way you thought he'd play

"But he said, 'Coach whenever you need me, I'm ready for it.' I thought our guys were ready when their number was called."

Arkansas' guards combined for 15 rebounds with 5 each from Joe and Jalen Harris, 4 from Jones and 1 from Embery-Simpson,

"We don't have a guy that can go get us 29 and 16," Anderson said, referring to the points and rebounds Gafford had his final home game against Alabama. "But guess what? We can have some guards go in there and get us 15 rebounds by committee, and we can have some forwards that can get us [10] blocked shots.

"I think shooting is all about confidence and the mindset, being able to take the shot and make it," said Osabuohien, who hit 4 of 6 shots. "So I felt that our team had a lot confidence in their shots.

"That's what we kept telling each other -- shoot the ball and don't hold back nothing. Everybody just played freely."