'Doing a lot of everything:' Anderson lauds Chaney's effort in NIT win 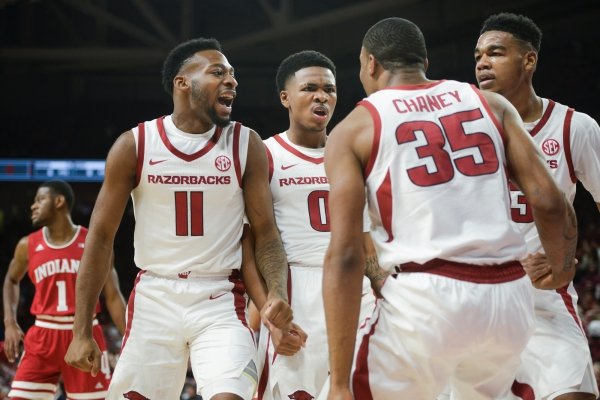 FAYETTEVILLE — Blocking shots isn't all about athleticism. It's more timing than anything, according to Reggie Chaney.

The freshman forward said as much after turning away a then-career high five attempts in Arkansas' 70-60 win over Georgia on Jan. 29. Tuesday night at Providence in the first round of the NIT, Chaney was even better, and showcased his four-star talents in a way rarely seen by an Arkansas player.

Chaney finished the 84-72 win against the Friars with a career-high 14 points, five rebounds and a career-best seven blocks. His stat line placed him in rare air in program history.

He became just the third Razorbacks player - second in Arkansas coach Mike Anderson's tenure - to reach those marks in a game alongside Darian Townes and Daniel Gafford, who did so twice in a two-week span in February 2018.

Following Arkansas' win, Anderson described Chaney as "a wrecking crew" and added that his stickback to put the Razorbacks back ahead by 15 with 6:35 left settled the team down after Providence made a mini-run.

"He was doing a lot of everything," Anderson said Thursday. "He was blocking shots and he was rebounding. Seven blocked shots, that’s being active. I mean, he blocks a shot and then he’s on the other end finishing on the fast break, he’s going to the basket tipping balls."

Chaney did not begin the game in the starting lineup. He has not been among the first group on the floor since Arkansas' loss at Ole Miss on Jan. 19, but he did draw the nod to open the second half Tuesday and started fast.

On Arkansas' first possession, the Razorbacks ran a set that included a cross-screen - as the team did for Gafford numerous times throughout the season - for Chaney and, after a shot fake, he finished over 6-10 forward Nate Watson, who totaled 15 points and eight rebounds in the game.

"We ran some stuff for him and he finished around the basket," Anderson said. "We were penetrating, guys were finding him and we were finishing off plays. We've seen some times this year where we, he, missed those chippies.

The cherry on top of Chaney's game, though, for Anderson was the toughness he brought to the floor, matching the Big East physicality Providence played with this season, he said.

Chaney matched a career-high 28 minutes (UTSA) in the win, too. Arkansas won its third straight and improved to 5-3 in games in which he plays 20-plus minutes.

In those eight games - UTSA, Georgia Tech, Austin Peay, vs. LSU, Tennessee, vs. Missouri, Georgia, Providence - Arkansas is strong on both ends of the floor with Chaney in the lineup, according to HoopLens. The Razorbacks' offense scores at a 1.13 point-per-possession rate over Chaney's 363 possessions, shoots 55 percent on 2-point field goals, which would rank 26th nationally, and 40.2 percent from distance - good for sixth in the country.

Defensively, Arkansas is allowing only .96 PPP in his 362 possessions. The aforementioned teams, in that span, made 46.1 percent of their shots inside the arc, 27 percent beyond it and turned the ball over 84 times.

"You got to see some of the individual talents that some of these guys bring to the table," Anderson said Tuesday. "I thought he did a good job on the glass.

"He was like a wrecking crew out there, blocking shots, coming up with tough, tough rebounds."