Home run nearly a Hogs' out 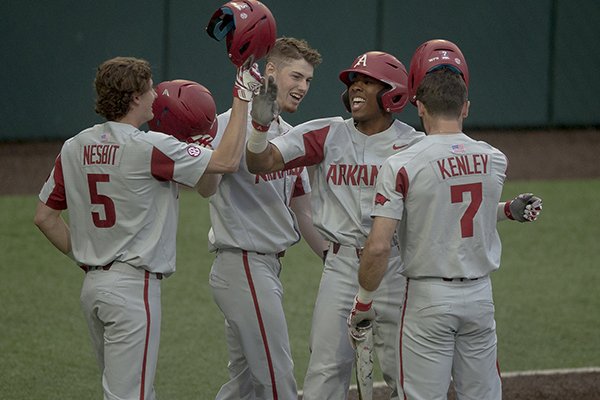 AUSTIN, Texas -- University of Arkansas left fielder Christian Franklin's grand slam was a thing of beauty as it soared slowly on a slight breeze over the wall in left field in the second inning of Tuesday night's 11-4 victory at Texas.

But the long, high shot almost turned into trouble for the Razorbacks as Franklin charged down the first-base line while Jacob Nesbit hustled back toward first base for a potential tag and advance. Because left fielder Eric Kennedy drifted slowly toward the wall, it appeared he might have a play on the ball.

Franklin hit the first-base bag and got a foot past Nesbit just as the ball cleared the wall. Had he passed his fellow freshman, Franklin would have been called out, Nesbit allowed to score and Franklin's "grand slam" would have been reduced to a three-run home run.

Auburn was victimized by a home run hitter passing a runner in a 5-4 loss at Arkansas last season.

"I actually didn't know the whole rule," Franklin said. "I didn't know if it was just like a foot or any part of my body past him, but after talking to the umpire, he told me it had to be my whole body."

Franklin's last grand slam came when he was in high school.

The Razorbacks followed up their six-run second inning Tuesday by batting around and putting up four runs again in the second inning of Wednesday's game.

The big inning featured a hit by pitch, a Jack Kenley double, run-scoring singles by Jacob Nesbit and Christian Franklin and a run-scoring throwing error by Texas shortstop Masen Hibbeler.

Nesbit's single, which plated Jordan McFarland with the first run of the inning, extended his hitting streak to 11 games.

The No. 9 University of Arkansas baseball team is off to one of the best starts in the history of the program and the pieces of the 2019 club are still not all together yet.

The Razorbacks improved to 18-2 after Tuesday night's 11-4 rout of No. 15 Texas at Disch-Falk Field.

That mark is tied for the best start for a Dave Van Horn team and is second best in Arkansas history behind an 18-1-1 record to open the 1982 season under Norm DeBriyn.

Matt Cronin is the last Razorback with a perfect ERA. Left-handed reliever Evan Taylor entered Wednesday night with a 0.00 ERA in 51/3 innings, but he allowed two earned runs in a sloppy third inning when Texas sliced a 4-0 deficit in half.

Cronin took a 1-0 record with no ERA and 6 saves in 9 innings pitched into the late innings of Wednesday's game.

There's a name for relievers who get the call in the middle innings, hold down leads and get credited with victories, as sophomore Kole Ramage has done on several occasions this year.

"Yeah, they always say that I come in and take everyone's wins," Ramage said Tuesday night after improving to 5-0 with three innings of hitless relief at Texas. "It just always happens when I come in. For some reason the starter hasn't gone the minimum to get the win count. It's kind of a running joke in the locker room right now, saying that I kind of vulture everyone's wins away from them. But it is what it is."

Ramage picked up wins over Eastern Illinois on Feb. 16 after Connor Noland pitched 42/3 innings, at USC on Feb. 21 with 31/3 innings behind Cody Scroggins and Patrick Wicklander, vs. Stony Brook on March 1 with 32/3 innings behind Scroggins, and vs. Missouri on March 16 after Noland's 42/3 innings. Ramage has allowed 2 earned runs on 13 hits and 3 walks in 18 innings, with 16 strikeouts, for an ERA of 1.00.

The Texas state legislature gave an official shout out to Arkansas sophomore Heston Kjerstad, who hit a 435-foot home run on Tuesday, leading up to the Razorbacks' two-game series at Texas.

Members of the Texas house of representatives passed resolution No. 492 on March 13 to honor the work of Kjerstad, a native of Amarillo and the son of Jody and Dave Kjerstad.

"Heston Kjerstad established himself as one of the premier first-year players in college baseball, and he may take justifiable pride in his outstanding achievements as he looks forward to a future bright with promise," the resolution read in part.