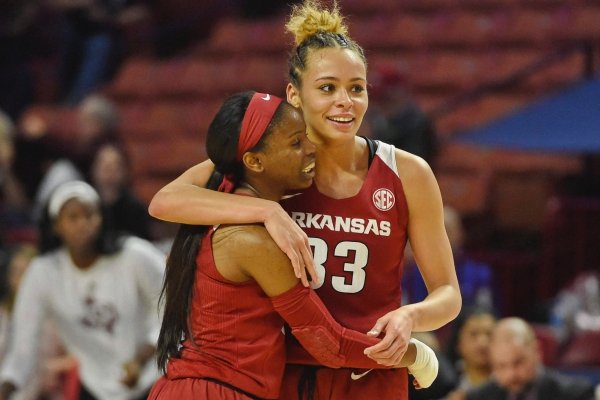 FAYETTEVILLE -- After playing four games in four days during a run to the SEC Tournament Championship Game, the University of Arkansas women's basketball team has enjoyed a lengthy break from playing.

The Razorbacks' first-round WNIT matchup against Houston at 7 tonight in Walton Arena is their first game in 11 days.

CHALK TALK The Arkansas-Houston winner will advance to play the Alabama-Birmingham vs Troy winner with the day and site to be determined … Arkansas and Houston are meeting for the first time since the 1991-92 season when both were Southwest Conference members and the Razorbacks swept the series. They won 88-61 at home and 78-76 at Houston … The Razorbacks are 9-6 at home this season, including 3-5 against SEC teams … Houston is 9-7 on the road … Razorbacks junior guard Alexis Tolefree and Cougars senior forward Myyah West were teammates at Jones (Miss.) County Junior College … Arkansas is playing in the WNIT for the seventh time and have a 14-6 record. The Razorbacks won the WNIT title in 1999.

"That old rusted-rested argument," Arkansas Coach Mike Neighbors said. "Every team's been different with me with every school I've ever been.

Neighbors gave his players three days off after the SEC Tournament so they would have at least a little bit of a spring break.

"It was great," Razorbacks junior guard Jailyn Mason said of the three-day vacation. "We had time to rest, and I think everybody took that very seriously.

"I don't think we'll be rusty. With these days between games we've had time to get our minds right and back into gear for practice and for the tournament."

The Razorbacks (20-14) were hoping to play in the NCAA Tournament, but they were among the last three teams left out according to the selection committee.

Arkansas' players said they'll turn their near miss for making the NCAA Tournament into motivation for the WNIT.

It's the first postseason for any of Arkansas' players.

"Us not making the NCAA Tournament, I think all of our mindsets are, 'We're going to show you that we deserved to be in it,' " Razorbacks junior guard Alexis Tolefree said. "We're looking to prove everybody wrong."

Neighbors said he's been told by several people that Arkansas was the final team left out of the NCAA Tournament.

Based on that, the Razorbacks should be a No. 1 seed in the WNIT, except the 64-team tournament doesn't have seeds.

"There is no way Houston would be a 16 seed in this field," Neighbors said. "We're certainly not looking past them. It's obvious it's not a 1-16 matchup."

Arkansas is No. 67 in the ratings.

Houston went 9-7 in the American Athletic Conference, including losing to national powerhouse Connecticut 81-61 at home and 83-61 on the road.

"When we show them Houston film, it will be very easy for them to get refocused," Neighbors said of his players. "Because if not, we won't play again."

The Cougars are 9-7 in road games.

"They have our full attention."

"I feel like the coaches have prepared the practice plan perfectly for us to be able to come out [tonight] and be ready to execute how we're supposed to play," Tolefree said. "It was good to have that break. We needed that rest.

"But since we've gotten back in the gym, we've really been working the whole time. We knew we were going to play in the postseason whether it was the NCAA Tournament or the WNIT, so we've been back to business."